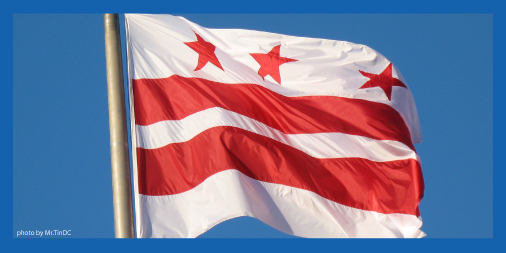 Allen said, “In many other jurisdictions, residents can request a state flag be flown over the statehouse to honor a specific individual or group, or to recognize a particular day or special event. This is true of the US Capitol as well. However, after constituents asked me how to get a DC flag flown over the Wilson Building, I discovered we don’t have this program in the District.”

Residents’ enthusiasm for the DC flag is well known and well deserved.  The flag’s iconic design – three red stars over two red bars on a white field – was rated as America’s best flag by the North American Vexillological Association. While an impressive honor, it is also an ironic one, as the best flag in the nation belongs to a jurisdiction that is still denied voting representation in Congress.

Allen’s bill will allow individuals to request a DC flag to be flown at the John A. Wilson Building for just the cost of the flag and would include an accompanying authentication certificate. The District Flag Request Program would operate through the Office of the Secretary of the District of Columbia, and require the Secretary to develop a process, form, and fee to cover the cost of the flag and certificate. The form would also offer individuals the opportunity to make an optional donation to the DC Statehood Fund.

“DC should make our flag, the symbol of so much civic pride, available to honor residents and formally commemorate special dates,” said Allen.