After the snow and ice last weekend, I hope everyone is looking forward to some beautiful spring weather in the days ahead! With the Emancipation Day commemoration, the conclusion of the Cherry Blossom Festival, and the Anacostia River Festival this weekend as well as many other great community events, I hope to see you around the neighborhood. And as spring arrives, so does the annual work on the District budget for next year. I have spent the last several weeks preparing for budget hearings and working hard on priorities across Ward 6. 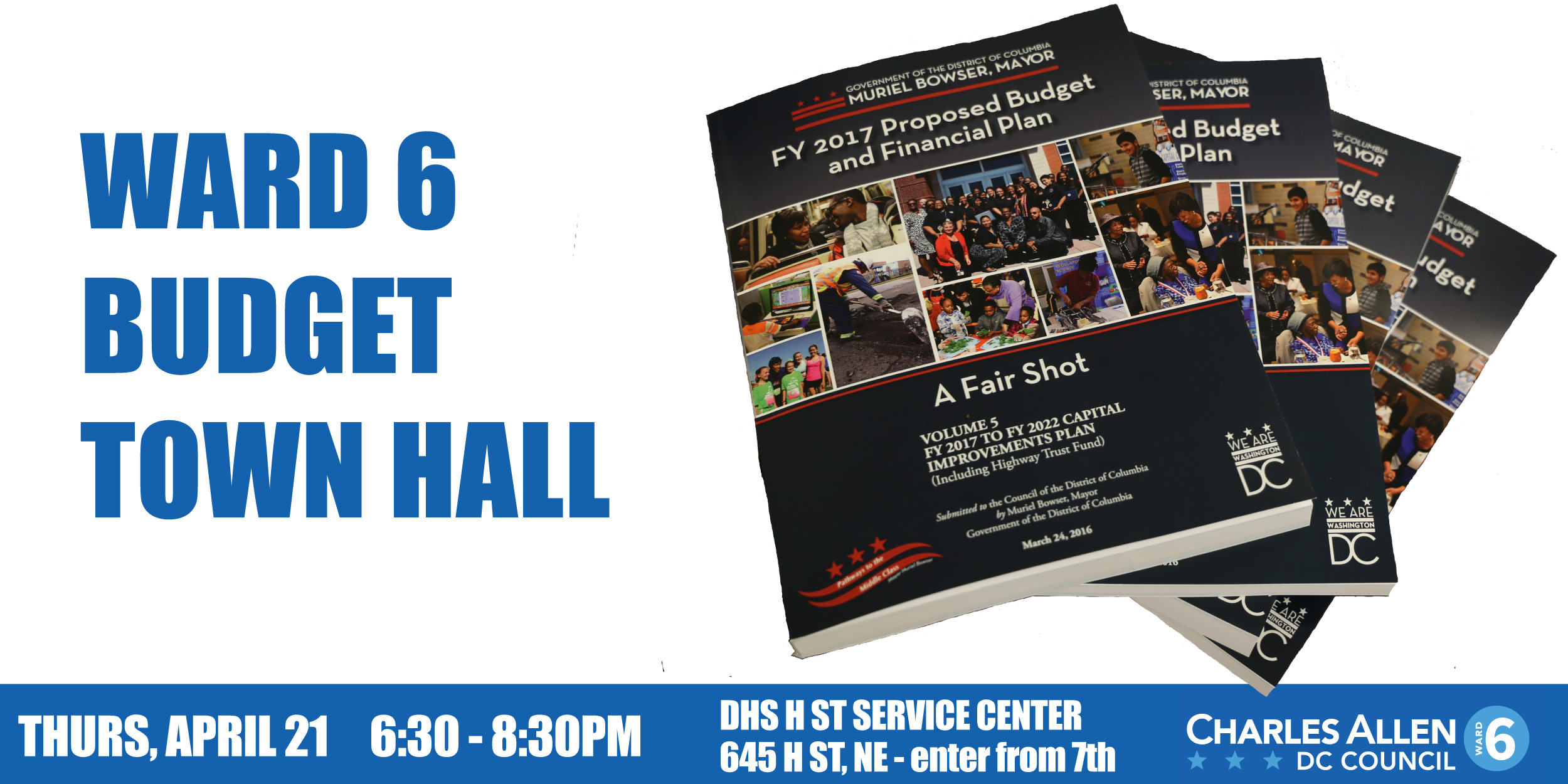 At the Council, the month of April is consumed with agency by agency budget hearings for the Mayor's proposed Fiscal Year 2017 budget. Thank you to the dozens and dozens of Ward 6 residents who have come down to the Council to testify. But I know not everyone can take time off work or get a babysitter so they can attend hearings down at the Wilson Building. That’s why I am hosting another Ward 6 Budget Town Hall on Thursday evening, April 21, at 645 H Street, NE to bring the budget closer to home, to share my budget priorities, and to ask you to share yours. Please plan to join me there and let your voice be heard! 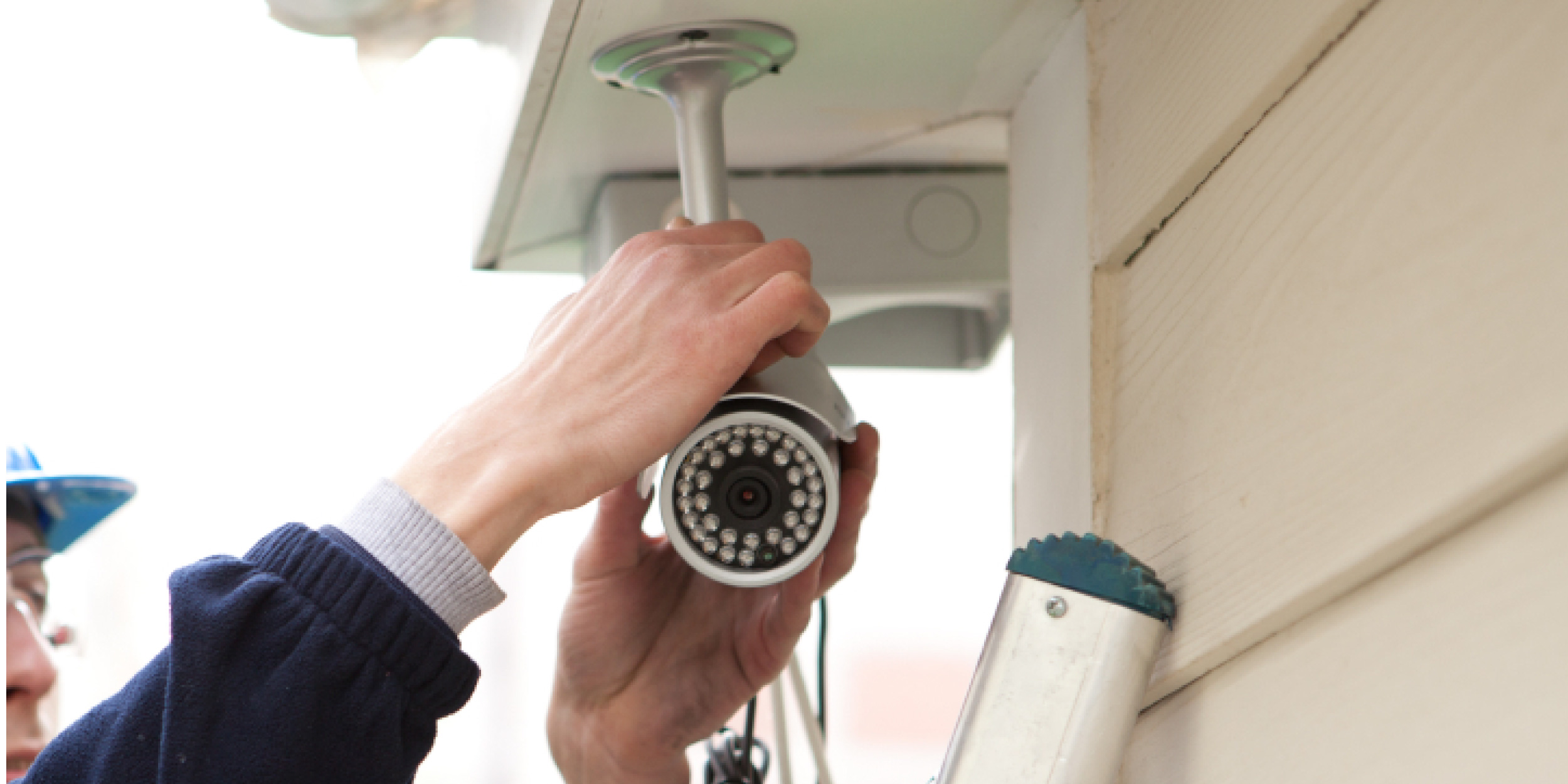 About a month ago, the Mayor rolled out details for the Security Camera Rebate Program I led through the Council. At the time, the Mayor shared the application and eligibility criteria, and as I noted, the city would issue revised and final rules for the program in April.

Initially, five PSAs in Ward 6 were eligible for the program and several neighborhoods were left out. But over the last several weeks, I've been working hard to expand the eligible areas across Ward 6 and have had great support from your ANC Commissioners. I'm glad to share that with the final regulations that were just published, almost every block of Ward 6 is now covered. Eligibility has expanded to now include PSAs 307 and 308 (roughly the Shaw neighborhood of Ward 6), and PSA 106 (roughly the Navy Yard neighborhood and southern portions of Hill East). The full list of Ward 6 PSAs now covered includes 103, 104, 105, 106, 107, 108, 307, 308, and 507. The priority areas outlined will remain the only eligible areas until July 31, 2016, at which time the entire city will become eligible.

Please remember that residents, businesses, non-profits, and religious institutions in these PSAs are now eligible to apply for the program. Complete information about the program, as well as the rebate application form, can be found here. The program can also be reached by phone at 202-727-5124 or via e-mail at security.cameras@dc.gov. 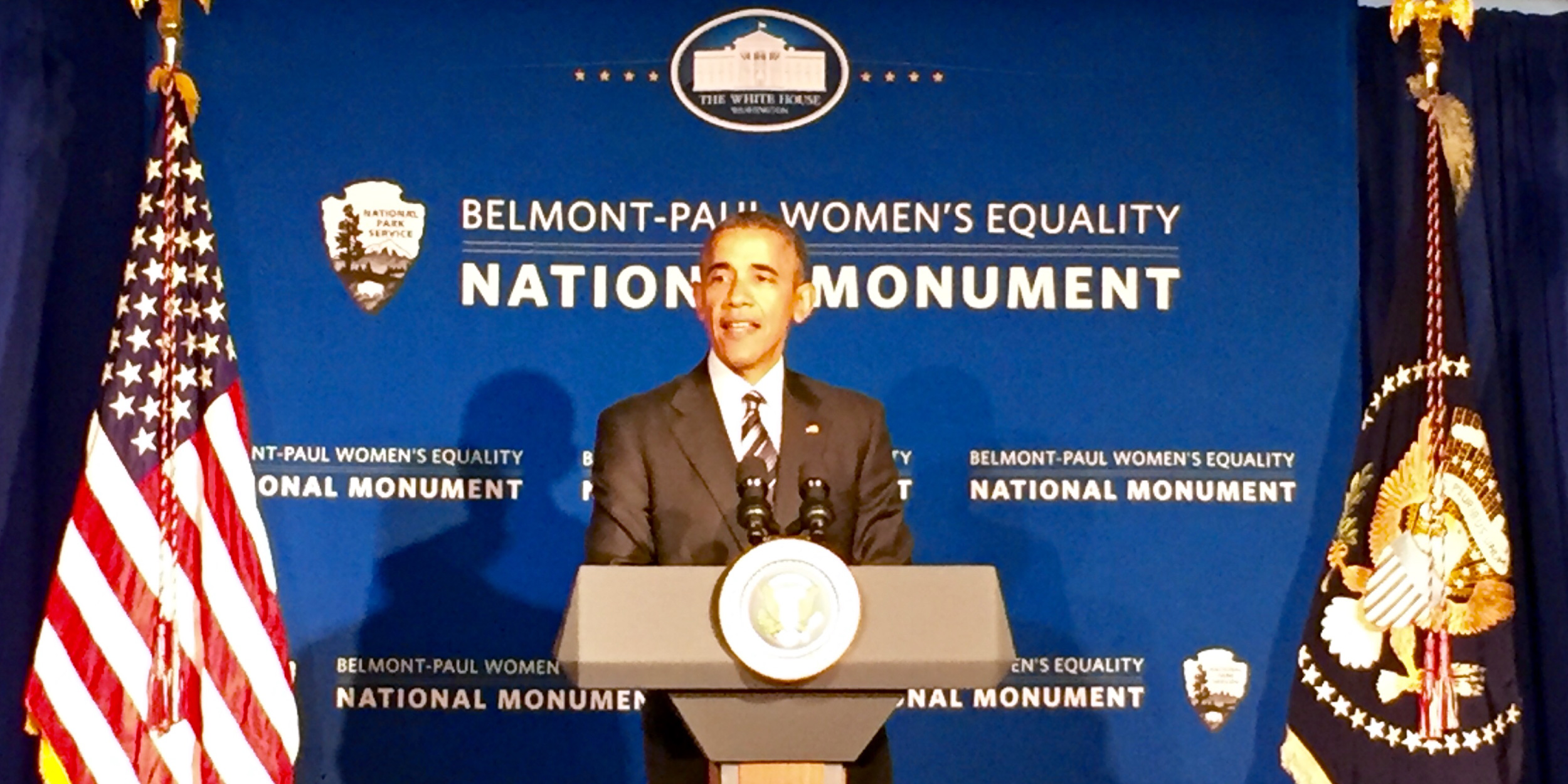 On Tuesday, I was honored to join President Obama, Congresswoman Norton, Senator Mikulsi, and many others for the dedication of the Sewell-Belmont House as the new Belmont-Paul Women's Equality National Monument. After working with all of my DC Council colleagues to send the President a letter asking for this designation, it was inspiring to see this important site receive the protection and investment so many have worked for so long to secure. Here in DC we have a special appreciation for the fight for voting rights and equality. The Women's Equality National Monument has an extensive collection of artifacts and documents from the US and across the globe. They are an amazing, humbling, inspiring reminder of the hard-won, decades-long fight for women's suffrage. Make sure you visit! 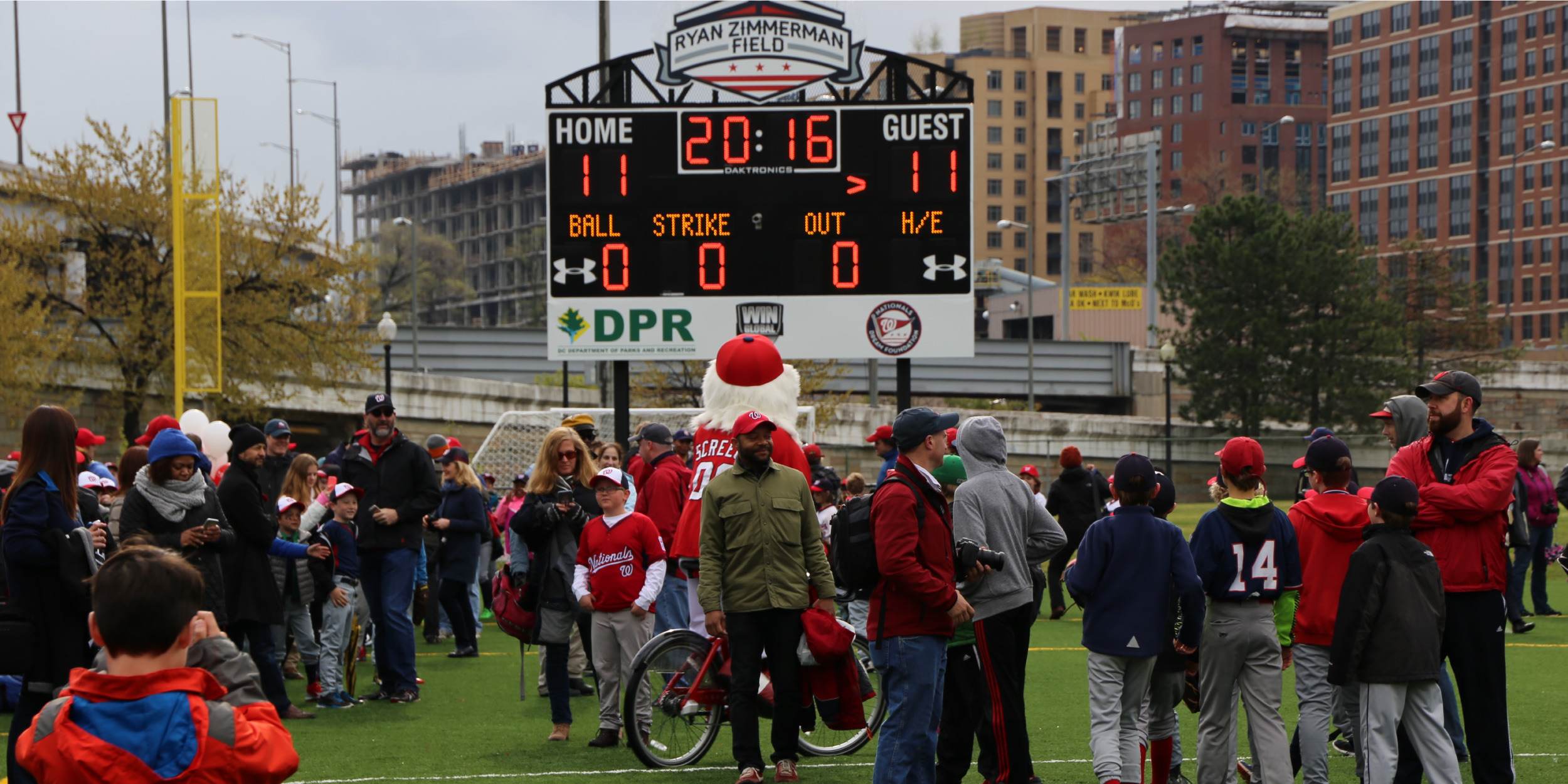 We made it through the rain, snow, and ice last weekend to officially open Ryan Zimmerman Field at Randall Recreation Center and kick off the Capitol Hill Little League season. With such overwhelming demand for field space, it's great to have another site in Ward 6 ready for use. While it will primarily be a home field for the Capitol Hill Little League, the renovated field is multi-use so that it can accommodate baseball, softball, soccer, and general use. It was great to join Ryan Zimmerman, Mayor Bowser, the Lerner family, Under Armour, DC Department of Parks and Recreation, ANC6D Commissioner Stacy Cloyd, and many others to cut the ribbon and toss the second pitch (c’mon, we had to let Ryan Zimmeran throw out the first pitch!). 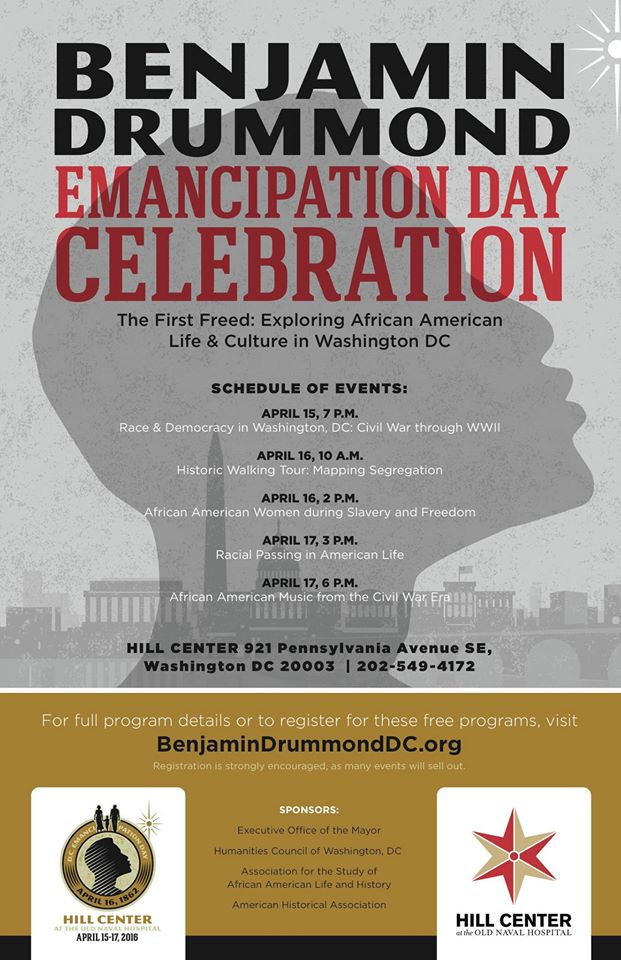 rday, the District will celebrate Emancipation Day. The holiday recognizes the importance of April 16, 1862, when slavery was abolished in the District of Columbia. Over 3,000 enslaved persons were freed eight months before the Emancipation Proclamation liberated slaves in the South. I’ve worked closely with the Hill Center and the Benjamin Drummond series to make them an official part of the city’s celebration this year. Please join me at the Hill Center on Friday for the opening event in their Benjamin Drummond series. I'll be helping kick things off that evening but the commemoration continues through the weekend. All events are free and open to the public. See the schedule or learn more about the history of Emancipation Day.

FreshFarm Markets will be kicking off another season of our much loved Saturday H Street NE farmers market. I’d like to invite you to join me for the ringing of the opening bell at 9:00 am. We will gather at the corner of 13th and H Streets, NE, and will ring the bell right at 9am, so come a little early if possible! To see the full list of market openings, click here. New to market this year will be Greenheart Juice, Rainbow Hill, and Zeke's Coffee. They will also be piloting the FRESHFARM Share, a weekly subscription of local fruits and vegetables that can be picked up from the H Street, NE Market. See you there!


As always, thank you for your support and please let me know if there’s anything I or my staff can do to help you or your neighborhood.