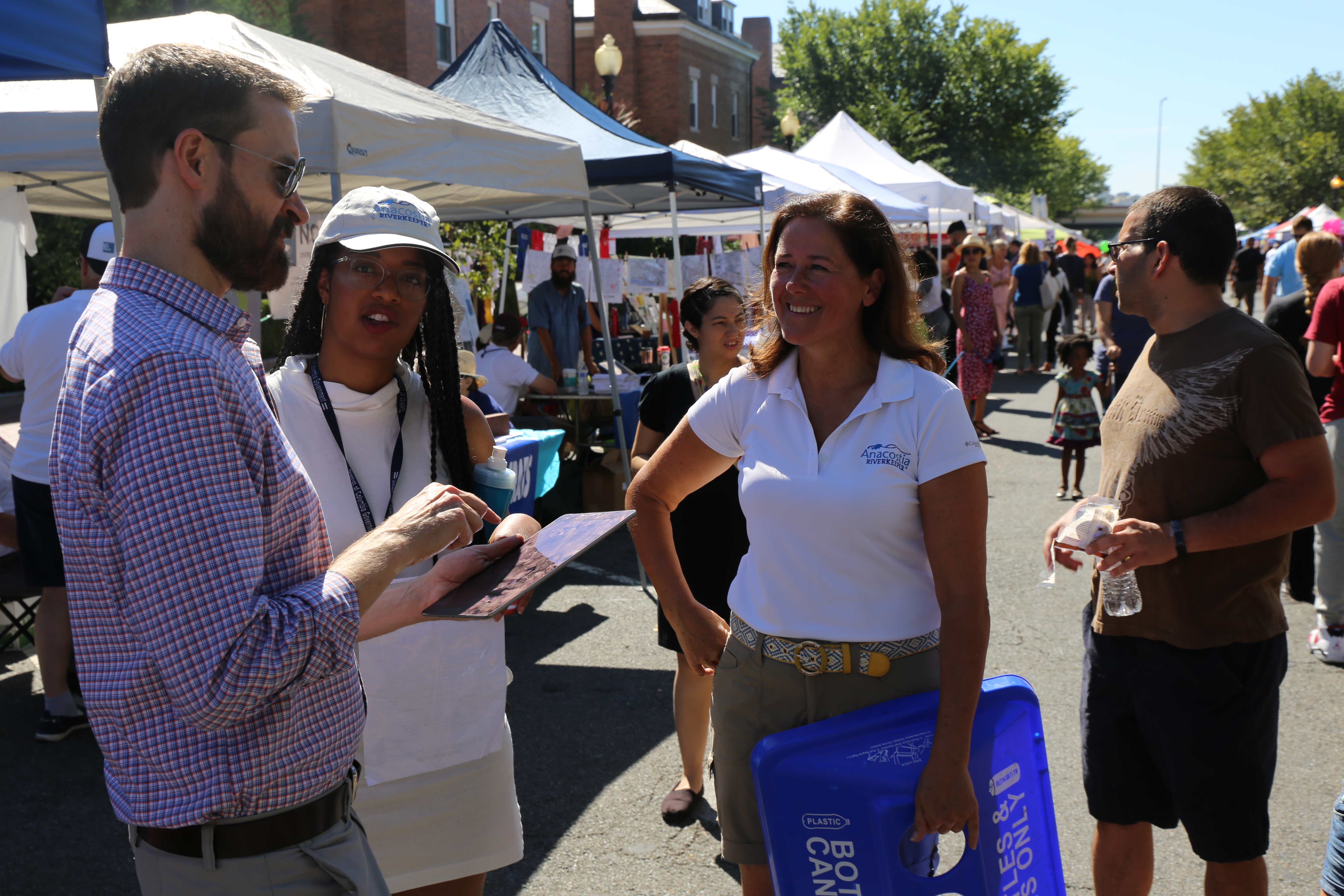 Reforming the Youth Rehabilitation Act: Late last year, a law dating back to 1985 called the Youth Rehabilitation Act came under discussion after the Washington Post ran a series of articles raising some serious questions about its effectiveness. In short, the law tries to give young offenders a second chance at a clean criminal record. As Chair of the Committee on the Judiciary and Public Safety, I have worked hard for the past 10 months to find out how to protect the best parts of this law while addressing some serious shortcomings. I introduced a bill that is the result of months of data analysis and hard, honest discussions with everyone from victims of crime to returning citizens to leaders in the public safety field. It's a dense topic, but I've explained where the law came from and how I'm proposing to fix it. I was encouraged to see the Washington Post weigh in and support my bill - knowing it is an issue they have covered closely.

Shaw Main Streets is a National Finalist for an "Ugly Duckling" Renovation of Ivy and Coney: Through a national competition, Shaw Main Streets is in the running to win $150,000 in grant funding to restore the historic building occupied by Ivy and Coney on 7th Street. Built in 1881 as a blacksmith's shop, the building is a great candidate. Anyone can register once and then vote up to five times per day until the end of October! Let's band together and win one for the DMV. Maybe we can even convince the notorious Cubs bar to hang some Nats swag as a compromise for our support now that the two teams will be facing off in the first round of the playoffs.

2018 is the Year of the Anacostia: I recently led an effort with my colleagues on the Council to name 2018 "The Year of the Anacostia" to celebrate next year's centennial anniversary of Anacostia Park. Between the opening of The Wharf, next year's All-Star game being hosted at Nationals Park, and DC Water's massive sewer upgrade that will remove 90% of sewage overrun, DC is about to realize we have two great rivers. Thanks to a lot of great work by many groups, residents, and the District government, the Anacostia River is making a major comeback. It's time to celebrate and highlight the river, and use this occasion to keep the momentum moving forward through legislation, awareness, and community-involvement. 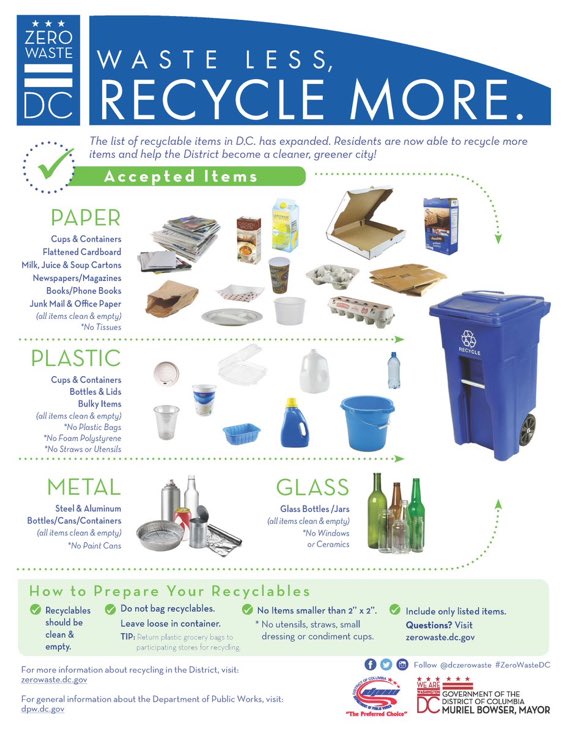 "Can I recycle that?" How often have you been confused about what goes in the trash and what can be recycled? Now you can ask ZeroWaste DC, a Twitter and Facebook account that answers tricky questions about what you can and cannot recycle through DC's single stream system (the big blue bins). For instance, did you know the system cannot handle plastic bags or plastic film? But envelopes with plastic windows are okay. More on their website as well.

Join me for a Pennsylvania Avenue Vision Summit: The stretch of Pennsylvania Avenue, SE from Barney Circle to Seward Square is the centerpiece of the community surrounding it, and there are more than a dozen major projects underway now or coming in the next few years on or near Pennsylvania Avenue in this area. From new development to existing challenges with infrastructure, join me for a chance to see the big picture and dig into the details with DDOT and other District agencies, developers, local leaders, representatives from our Main Streets programs, and more, all in one place. The Summit will be held on Tuesday, October 17, at 7:00pm at the Hill Center (921 Pennsylvania Avenue, SE).

33 units of affordable housing are coming to H Street: I was honored to be part of the groundbreaking ceremony at the R.L. Christian Library site at 13th and H St, NE. With all of the development taking place along H Street, its important it remains a community for everyone to call home. The project is 100% affordable - including 2- and 3-bedroom apartments. Video of my brief remarks on the project are on my Facebook page.

Are you familiar with the 11th Street Bridge Park? If not, you're missing out on one of the most exciting park projects in the country, which will cover the old 11th Street Bridge connecting Capitol Hill with our neighbors across the Anacostia River. Head over to the project's website for their latest news. I'm encouraged by the conversations and action taking place to help preserve affordable housing around the park (via Curbed DC).

Parking Cash Out Bill: I've introduced a bill currently under review at the Council that would require employers who offer free or subsidized parking to give their employees who would rather take transit, bike, or walk the option to use that parking value toward their preferred commuting method (and other expenses) instead. For employees who are offered this benefit (again, when employers choose to provide free or subsidized parking), they should be able to take advantage of a cheaper commute if they do not or cannot drive. NBC 4's Tom Sherwood covered the issue and the Kojo Nmandi Show discussed it as well. Following the recent hearing on this bill, I'll keep working with several stakeholders to fine-tune the language and hope it can move forward later this year. At the end of the day, this is about trying to help workers choose the commute that works best for them rather than only subsidizing commuting by car.

The Southwest Neighborhood Library is getting modernized: In any neighborhood, having a great local library is not only an important resource and community hub, but a point of pride. With $18 million in this year's budget, the design process is finally underway to modernize the Southwest Library and there are opportunities to provide public feedback and share your priorities. If you missed the most recent meeting, the presentation slideshow is here.

Action alert for DC Water customers - Just a reminder that if you are a homeowner, DC Water created a new web portal for managing your auto-payment. You will need to go in, create a new login (even if you're an existing customer) and then re-setup your auto pay. More information here.

Walk to School Day was outstanding as always: Walk to School Day is an international event at this point, but I still think Ward 6 does it best. We were joined this year by civil rights icon Rep. John Lewis and our own Rep. Eleanor Holmes Norton (both of whom walked to school before going on to serve in Congress)! Thanks to the amazing team who brought together so many schools, kept everyone caffeinated, and safe. Pictures on my Facebook.

From missed trash pick-up to DC tax issues, my office can help! In the past few months, my constituent services team has helped with a wide-range of needs. When a neighbor's trash wasn't picked up two weeks in a row, we were able to get a trash truck out there the same day. And for a resident who had some out-of-state tax issues from a previous time living in DC, we were able to get it cleared up with the Office of Tax and Revenue. Don't hesitate to call if we can help! 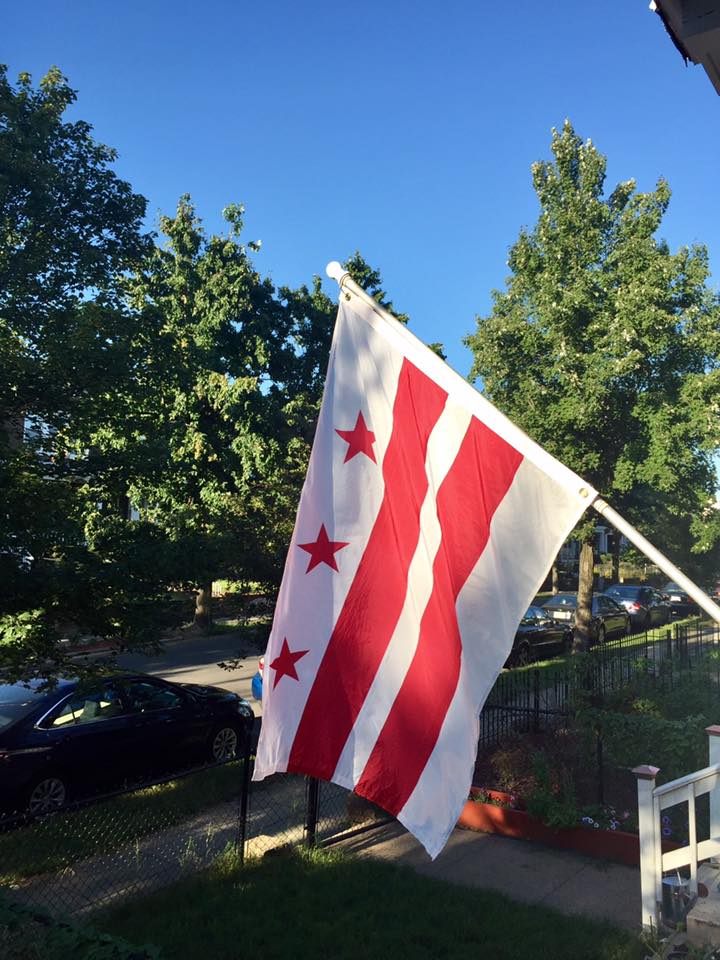 Fly a DC State Flag from the Wilson Building: I wrote earlier about a program I helped start finally launching that allows residents to purchase a DC flag flown at the John A. Wilson Building, our state capitol. This is a program common to many states across the country (as well as Congress) and I wanted it to be no different here. And good news -- now you can pay with credit card through the Council's Office of the Secretary!