We are a little more than halfway through Performance Oversight here at the Council. Performance Oversight is a specific time frame at the Council when we bring agency directors before Council committees to review what the agency did in the past year, ask what's working and what isn't, and dig into specific issues based on what we've heard from constituents or advocates or have seen reported in the media.

It is hardly the only time of the year when we ask tough questions, but it is a critical part of preparing for the budget process and ensuring that the laws and funding set by the Council are being implemented. And speaking of setting priorities and funding in the budget... 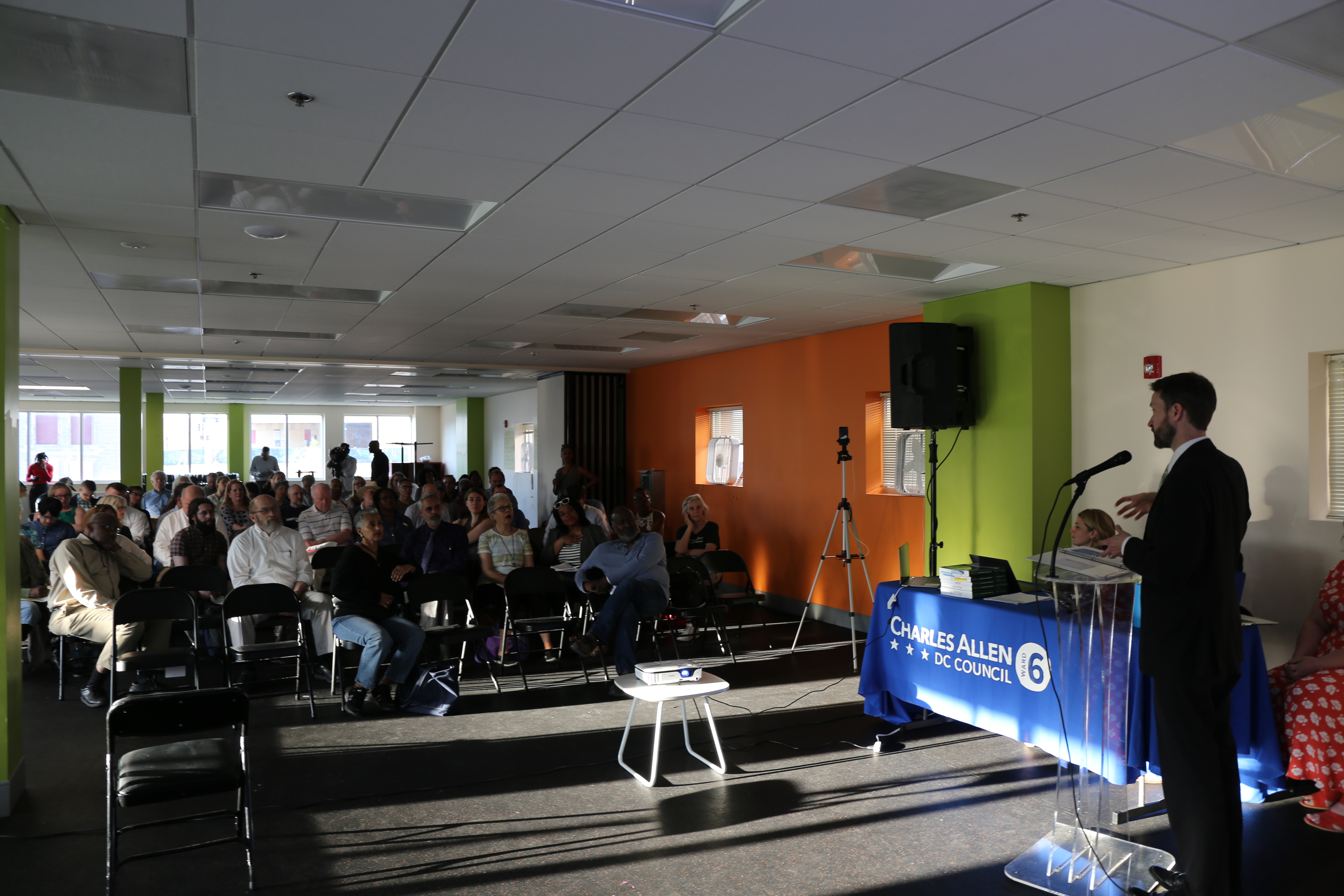 Budget Priorities for Ward 6 - On March 19, the Mayor will release her proposed budget for the coming fiscal year, beginning October 1, 2020. I sent a letter to the Mayor laying out some of my priorities for both Ward 6 and the Committee on the Judiciary and Public Safety, which I chair. I'd like to emphasize this isn't meant to be an exhaustive list of things I'd like to work on (including affordable housing and homeless services funding), but a chance to highlight some important items and find common ground while the Mayor is still finalizing her budget proposal. The Council will have a lengthy process to finalize the budget and make adjustments, and that will include a lot of important work with my colleagues and their committees.

Related: I'll be holding my annual Ward 6 Budget Town Hall on March 25. I'll walk through overview and then open up the floor for residents to share their priorities with me and my team. Hope you can make it!

Weigh in on Proposed Metrobus Cuts and WMATA's Budget - WMATA is now taking public feedback on its next annual budget, which begins on July 1, 2020. Included in the proposed budget are service cuts to more than 30 Metrobus lines in the District. Many of these cuts will affect Ward 6 residents, though some cuts are likely offset by other bus service. Additionally, WMATA is proposing increasing base fare for express buses from $2-3. However, along with these cuts, the budget also proposes lowering the transfer from bus-to-rail and restoring late night service and matching Sunday schedules with Saturdays, all changes I support. But this is the time to speak up if there's a bus cut that has you worried or would make it much harder to use the system. Here's what you need to know:

I want to emphasize we should be extremely careful about cutting bus service. As I told WMATA's General Manager in oversight last week, there's a lot to like in this budget. But let's not make it work by balancing the budget on the backs of bus riders, who are far more likely to depend on public transit to get around. Improving bus service is the low hanging fruit to strengthening our public transportation system and a lifeline for households with a lower income. Please take a moment to share your opinion if you can.

Metro Transit Police Don't Answer to Elected Leaders and That's a Problem - I believe I've mentioned before in this newsletter that the Metro Transit Police Department, the police force for all of WMATA, are the only tri-jurisdictional police force in the country. And ultimately, due to the structure of WMATA's compact, they only answer to the WMATA Board, and not to any elected officials or people who live in the District, Maryland, or Virginia. That means there is very little external oversight when police encounters go wrong. On Thursday, I introduced a Sense of the Council resolution, along with my colleague Councilmember Robert White, calling for the creation of a civilian oversight board, akin to DC's Office of Police Complaints, which investigates complaints against our Metropolitan Police Department. Sound oversight, including the ability for residents to bring formal complaints to an external and authorized body, makes policing better by improving the relationship between police departments and the communities they serve. Read more in WAMU. 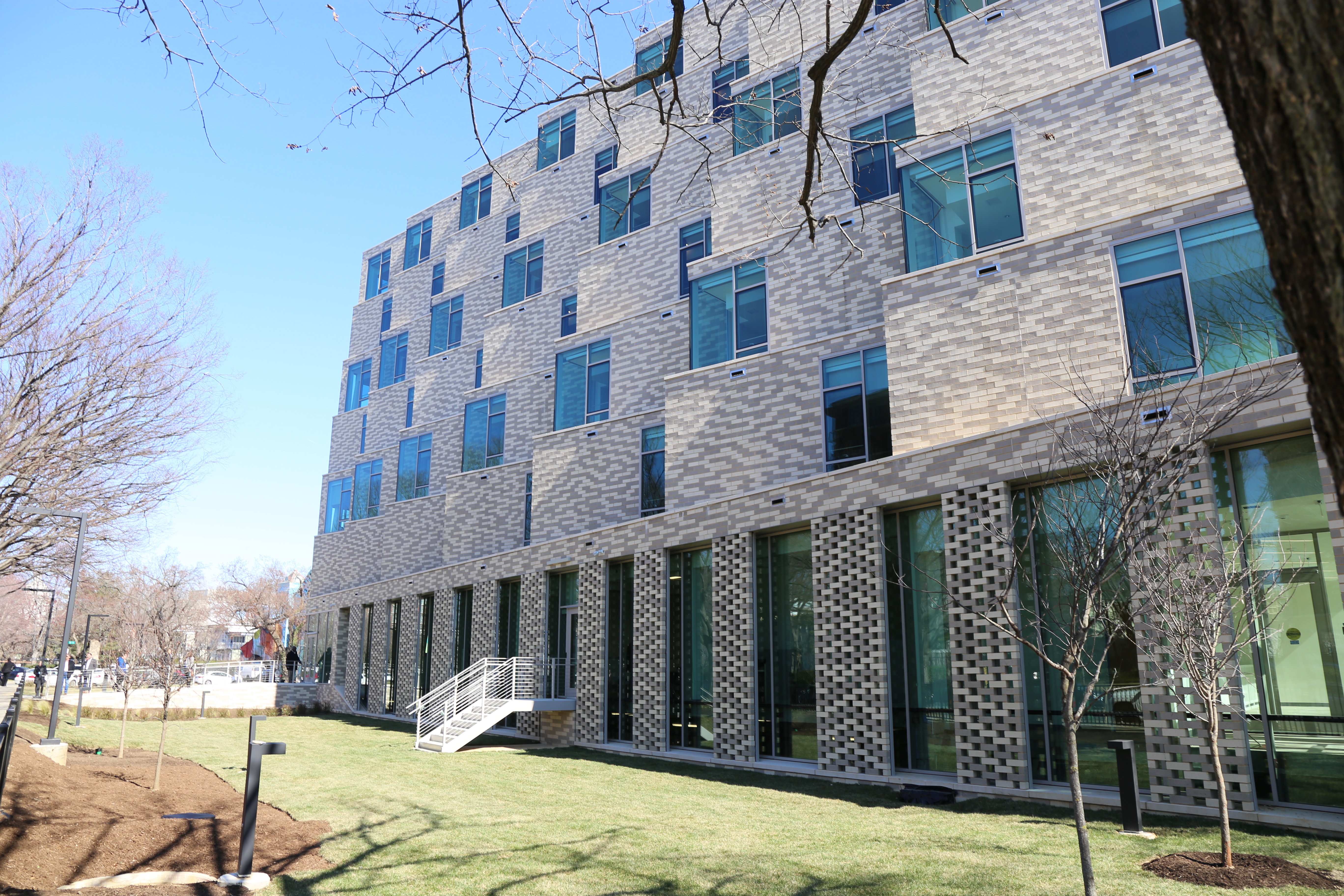 Meet "The Aya" - On Friday, we cut the ribbon and officially opened "The Aya," Ward 6's short-term family housing site, which will soon welcome up to 50 families experiencing homelessness. Those families and this building are going to be wonderful additions to our Southwest community. I was very impressed by the new building, which is as thoughtful as it is beautifully designed. The rooms are spacious and brightly painted with easy access to bathrooms. On every floor, there's both an outdoor play space for kids to explore and play, and a community room where residents can spend time together and kids can do homework. There's wifi throughout the whole building, which is not just nice, but essential for families who have little data to spare as they keep in touch with family, social workers, doctors, and job opportunities. And best of all, the Unity Health Clinic that has occupied the space for decades will be returning to serve both residents of The Aya and Southwest neighbors. Here's a short video with my thoughts following a preview tour.

Got a child under 4? You are likely eligible for a $1,000 tax credit - Since it's tax season, I want to make sure I flag for all of my Ward 6 parents with young children you are likely entitled to a tax credit based on expenses you paid in 2019 toward child care costs via the Early Learning Child Tax Credit, something I fought to make permanent in our budget following a successful one-year trial. Check to see if you qualify before you file!

Apply for a $10,000 Small Business Grant - Are you a small business owner in the District? Even if you aren't, make sure to pass this on to your favorite small business. The Department of Small & Local Business Development is accepting applications for up to 40 grants of $10,000 each to award to retail businesses. The window to apply is open through March 15 at 2 pm. More information here.

Ludlow-Taylor Students Featured in Council's Black History Month Program - I quickly want to shout out the inspiring art work from Ward 6's Ludlow-Taylor Elementary School students, who created really excellent paintings based on Jacob Lawrence's epic Great Migration Series that were on display during the Council of DC's annual Black History Month Program. Check out some of their art here. 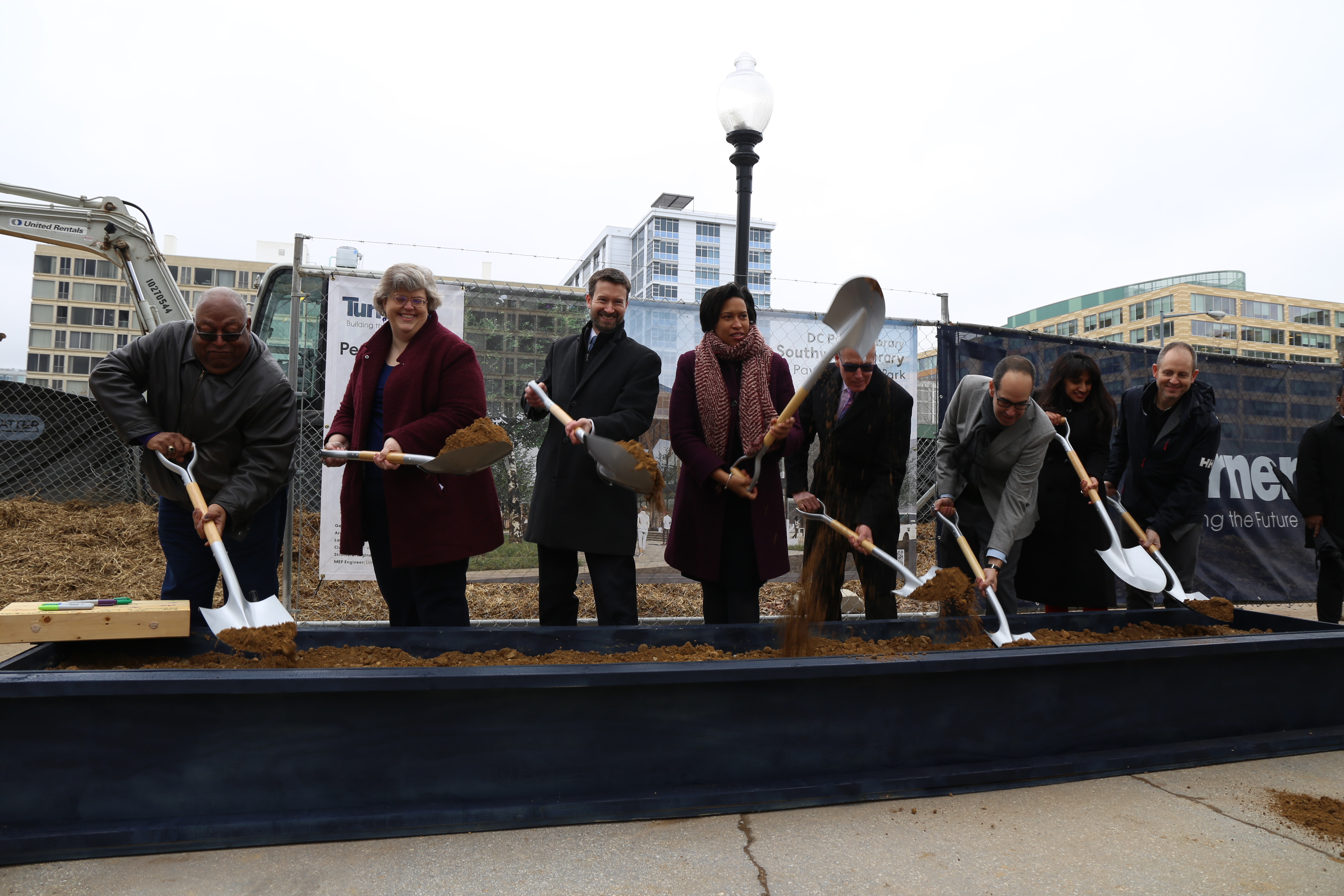 Southwest Library Groundbreaking - We reached a long anticipated milestone in Southwest a few weeks ago when we got together and officially "broke" ground on our new Southwest Neighborhood Library. I put it in quotes because the library's construction is already well underway and I know we are all eager to see the new, modern, and expanded library open its doors to the community. When completed, the Southwest Library will be a building and public space we are proud to hand down to the next generation as a celebration of our belief that everyone deserves access to knowledge and that libraries are truly "palaces for the people." The Hill Rag was there for the moment.

Do the Write Thing Challenge Returns - The Office of the Attorney General is inviting middle schools students to participate in a national essay contest sharing their experiences and ideas on how to stop violence. Learn more here, and note that submissions are due by March 13, 2020.

City Paper Highlights Black-owned Businesses Coming to H Street - I've made a big effort to support our small and local business community, most recently by introducing two bills that change the incentives for landlords to rent to small businesses and another to help support longtime businesses. Given how often we hear about the beloved businesses that close their doors, this was an uplifting piece by the Washington City Paper highlighting five, black-owned new businesses that have recently opened their doors or are planning to along H Street NE.

Our Firefighters and Emergency Response Teams Deserve Better - One of my big focuses as Chair of the Committee on the Judiciary and Public Safety has been improving the sometimes awful conditions of our firehouses. As far as I can tell, these are the only DC government employees who routinely live at their workplace for several days in a row. And some of the conditions are downright unacceptable. This is an issue I've been following and will continue to stay on top of until conditions improve. WTOP has more on the story.

Lansburgh Park Community Meeting - Happy to share that a long-awaited meeting on improvements to Lansburgh Park has been scheduled! Join Southwest neighbors, the Department of General Services, and the Department of Parks and Recreation to discuss planned improvements to the park ranging from lighting to pavilion construction. I first funded these improvements two budget cycles ago, and I know I share many neighbors' excitement that these improvements are finally in progress. The meeting is at King-Greenleaf Recreation Center (201 N St., SW) on Tuesday, February 25, from 6:30-8 pm. 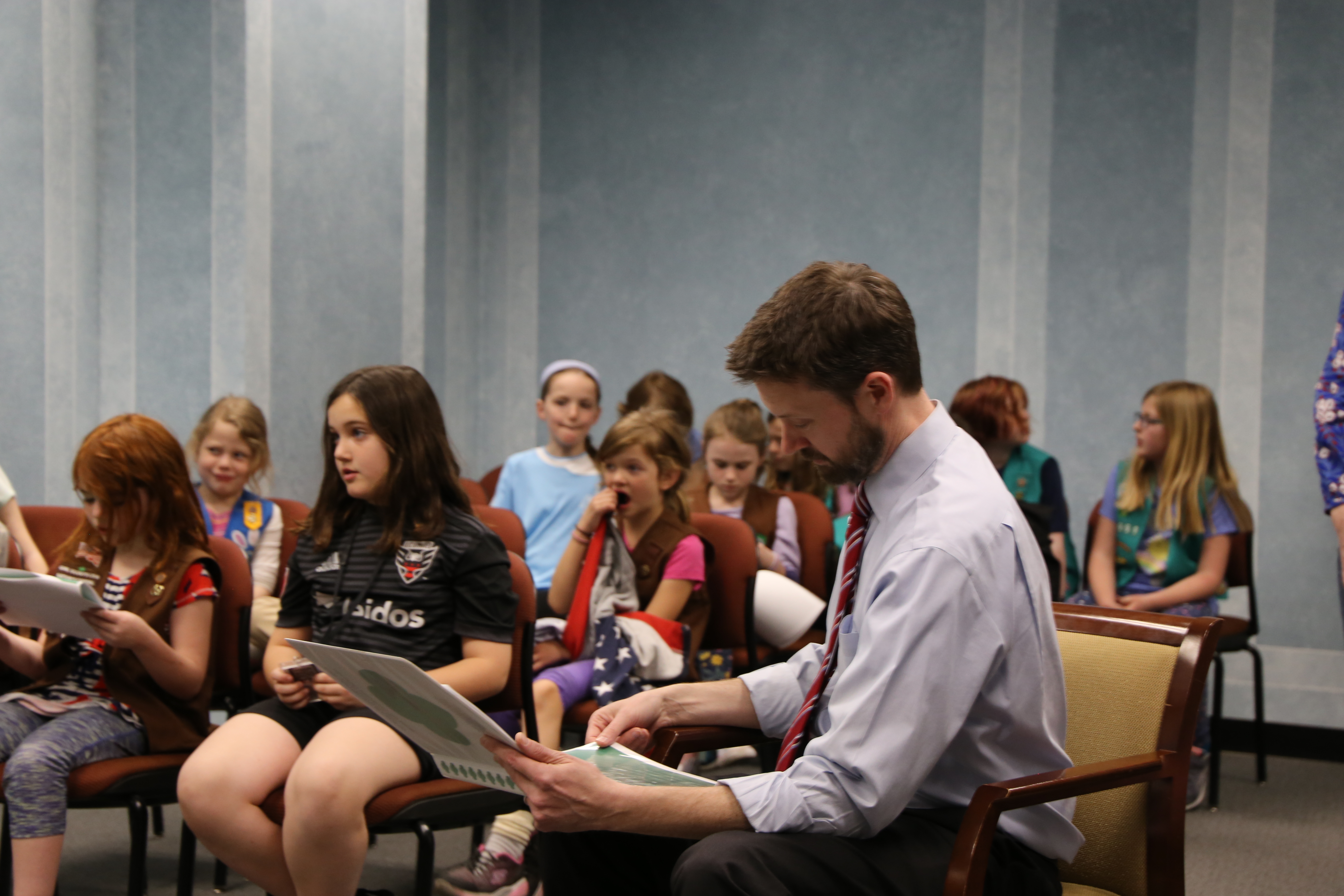 Ward 6 Girl Scouts Were on Kojo Nmandi - Representatives from three Ward 6 Girl Scout Troops were special guests on WAMU's Kojo Nmandi Show to talk about their advocacy efforts to get the Big Brown Bat named DC's official state mammal. It was my honor to call in and share how their research and advocacy transformed into a bill I introduced last spring! Last March, representatives from three local Ward 6 troops made a presentation to me (photo right) that impressed me so much we decided to take action. You can catch the segment here.

Free Trees (yes, really) - Just a friendly reminder that via a program funded by the Department of Energy and the Environment, you can get free trees planted at your home, school, or community through Casey Trees. Help grow our urban canopy and keep our air clean and temperatures lower!