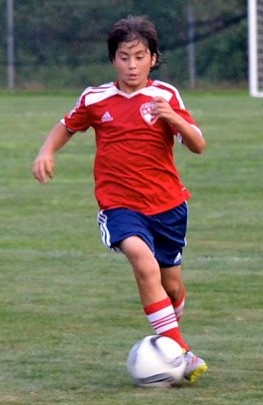 Takamura plays for the CapitalFC United Red boys U14 team in the District.  An eighth-grade honors student at BASIS Washington DC Public Charter School, he started playing soccer at an early age and joined CapitalFC as an eight-year old.

Councilmember Allen said, “It’s great to see District kids like Kalani competing and excelling at the very highest levels. I’m proud of Kalani and his impressive accomplishments, as well as our local community youth sports programs like CapitalFC, Sports On The Hill, and Capitol Hill Little League that provide top-notch skill-building opportunities for thousands of District youth.”

Mike Barrette, his Capital FC coach, said, “I’ve had the pleasure to coach Kalani for six years.  He has always been the smallest kid on the team, but his skill, heart and dedication to the game sets him apart.  He really stood out on our team’s recent trip to Barcelona and he has carried his strong play through the summer.”

CapitalFC has rapidly grown its new boys and girls travel soccer program from 3 teams up to 22 teams in just 5 years.  Since then, 19 CapitalFC players have been selected into district and state US Olympic Development Programs, and Takamura is the first CFC player to receive a US Boys National Team invitation.  CapitalFC has also partnered with Holland’s First Division club, FC Utrecht.  Through that program, Takamura earned a spot at their national identification camp in Georgia.  He was then invited to a local training event hosted by the US Soccer Federation, scoring one goal and dishing out two assists against very high level competition.  CapitalFC Technical Director, Whitney Minnis, attended the session and wasn’t surprised when Takamura received the invitation. He said, “Kalani stepped it up and made a great impression on the coaches.  He trained hard this summer and his work has paid off.”

Councilmember Allen said, “Ensuring every child in the District can take advantage of the excellent opportunities available through our local youth sports programs means we have to provide access to the fields and playing space they need. The ability of these programs to serve our growing population means increasing the amount of available field space. The Capital Riverside Youth Sports Park, a plan to build multi-sport athletic fields near RFK Stadium, is one way we can make sure Kalani and other District kids can continue to access top-quality youth sports programs in their neighborhood.”