It's been quite a spring so far. From the frenzy of budget hearings and votes to some heartbreaking losses on our streets, I've had the opportunity to talk with a lot of Ward 6 residents about a big range of issues.

And all I can say is that my team and I are working hard on a number of fronts to see important improvements are made. I'm extremely grateful to those who took time to talk with us, to show up to meetings and rallies, and trust that we'll hear you and act. Let's jump into the newsletter because there's a whole bunch to share. 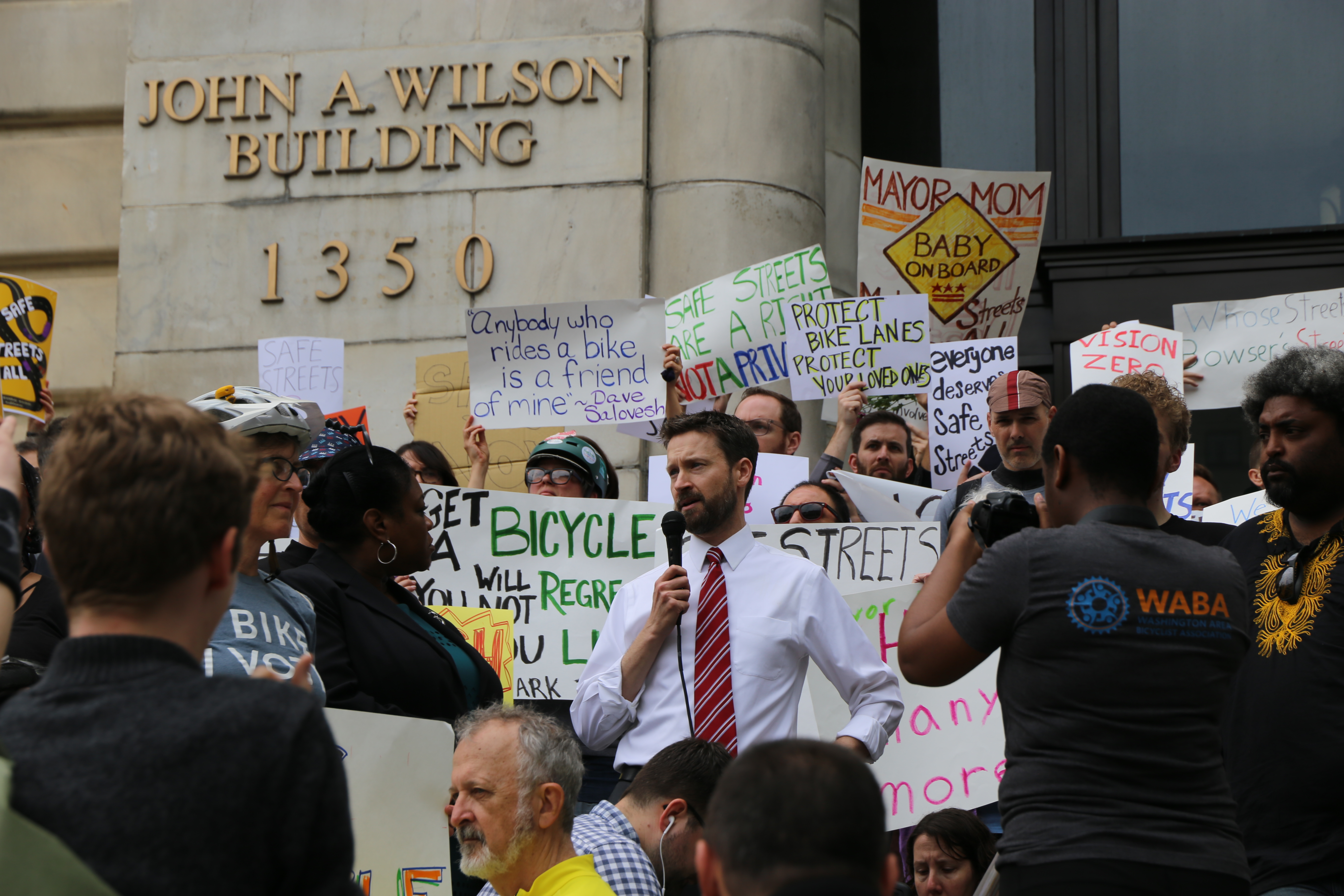 We Need Streets That Are Safe For Everyone - On the weekend of April 19, three people were killed in traffic fatalities on DC streets. One was Ward 6 resident Dave Salovesh, who was killed while on his bicycle on Florida Avenue, NE, one was a visitor to DC named Abdul Seck, walking on the sidewalk in Ward 8, and a third was a driver going too fast in Ward 7 who lost control. It was a tragic and painful reminder that our streets are not safe and they certainly aren't designed to make sure people feel safe walking or biking. I introduced emergency legislation to force DDOT to move much faster on redesigning Florida Avenue, where two Ward 6 residents have been killed in the past few years and DDOT has been promising fixes since 2009. I spoke at a rally for traffic safety and called for an end to traffic deaths in the District. I introduced a more comprehensive bill to make it safer to walk, bike, ride, or drive in the District - I held a community meeting last Monday to brainstorm. Over the weekend, a 24-year-old man was killed in a crosswalk and a woman injured in a car accident died from her injuries - that's 10 people who have died this year in traffic-related incidents.

Most people who choose to walk or bike don't think of themselves as a pedestrian or a cyclist. They're just Mom or Dad doing drop-off or someone who gets around by walking or riding (even if just to the bus stop). And it's time to recognize that is a good thing for the health of our city. It is also time to acknowledge that protected bicycle lanes, good sidewalks, marked crosswalks, and roads that discourage dangerous driving aren't luxuries for certain neighborhoods, but central to healthy living in every part of the city. Despite having the lowest car ownership rate in the city, Ward 8 had the highest number of traffic deaths last year - followed closely by Wards 2 and 6.

Related: Bike to School Day is Wednesday. This fun annual event plays an important role in advocating for safer roads for our daily activities. Hope you can join us! 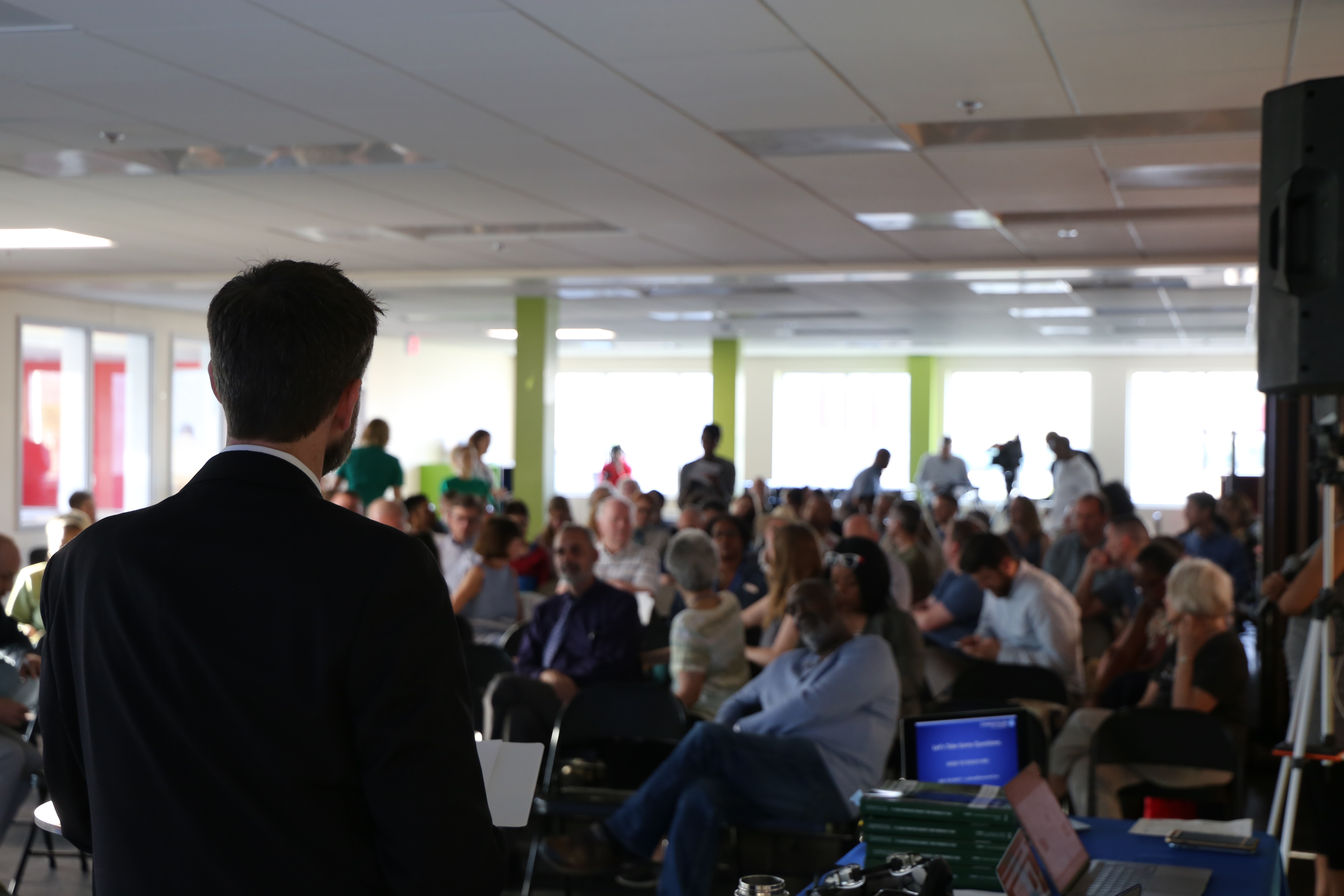 Budget Town Hall and Update - Two weeks ago, we had a packed room for the Ward 6 Budget Town Hall. I want to thank everyone who carved out some time on a weeknight to share input on the budget. Here's video and here's a link to my presentation for download.

Last week, Committees voted on budget recommendations. Now that all 13 Committees have made their recommendations, the Chair of the Council will make any changes before the Council votes for the first time on May 14. I am the Chair of the Committee on the Judiciary and Public Safety. A few of the key highlights (longer list available here) from my Committee, which passed unanimously last week:

Save Shaw Middle School - A little noticed change in the budget moved the modernization of Benjamin Banneker High School from its current, historic location in Ward 1 to the site in Ward 6 that has long been promised as a neighborhood middle school for the Shaw community. It would effectively begin the demolition of Shaw Jr High School and the construction of a high school at that site on Rhode Island Ave, NW. During the Committee on Education vote, I introduced an amendment to redirect the project back to its current site. Unfortunately, my amendment was defeated by a vote of 3-2. This is not the way to make a decision of this magnitude. I want to ensure Banneker gets the full modernization they deserve and have awaited for so long, but also plans for a neighborhood middle school in Shaw. I've signed on to a letter with six of my colleagues to this effect -- I'll continue to fight for a more transparent solution that works for everyone. 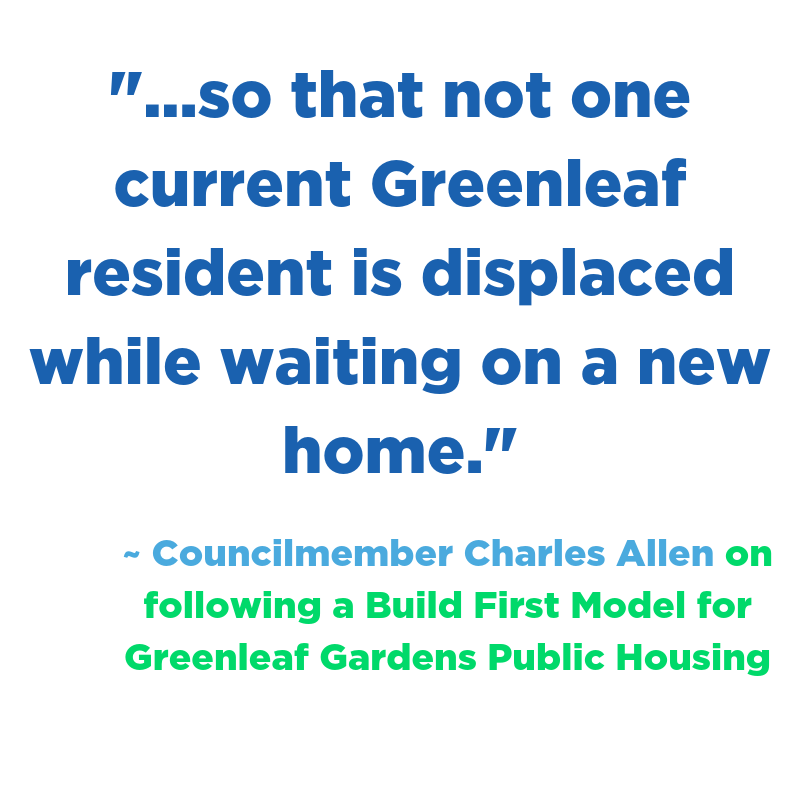 Any Redevelopment of Greenleaf Gardens Must Be "Build First" - DC Housing Authority has released a Request for Proposals to redevelop Greenleaf Gardens and Senior Apartments, 493 deeply-affordable homes located in the heart of Southwest. I am glad to see this process moving forward, but whatever proposal ultimately is selected must follow a "build first" model for Greenleaf residents. We've seen too many families displaced in the past based on the promise of future housing. "Build First" means the first new apartments are completed so families can move in before any demolition of older buildings happens. Here's more from Washington City Paper, which has done excellent reporting on the awful state of repair in our aging public housing (Greenleaf opened in 1959), and here's my full statement.

I was on the Kojo Nnamdi Show - Two weeks ago, I was the guest on the second half of the "Politics Hour" on the Kojo Nnamdi Show on WAMU. During the segment, we discussed public safety issues, particularly around if MPD officers should be handcuffing young children who are not under arrest (more below). We also talked about Vision Zero and how do we, as a city, get to a place where no dies while traveling on our streets. Give the show a listen and let me know what you think -- my segment begins right at the 30-minute mark.

Kids Shouldn't Be In Handcuffs - I've requested all of the Metropolitan Police Department's internal policies around detaining minors, particularly when placing them in handcuffs if they aren't under arrest. Recently there have been a few high profile instances in the media of young, African American boys being handcuffed, despite not being arrested. I can't say it any more plainly than this: we don't want kids placed in handcuffs unless it's an absolute last resort. I can't imagine the pain this causes the child and the family, and I know it hurts the perception of MPD in the community. Attorney General Karl Racine, whose office is tasked with all juvenile criminal prosecution, has agreed to review national policing standards when dealing with juveniles and make recommendations. I fully support this approach and will work closely on any needed legislation.

Why We Need Transparency for All Public Schools - Earlier this year, I introduced a bill that would extend open government laws such as FOIA and the Open Meetings Act to all publicly-funded schools, including public charter schools that educate nearly half of the District's students. The DC Line has commentary looking at whether or not DC public charter schools are complying with DC laws, including the 2015 Youth Suicide Prevention Act. Being able to FOIA school records for compliance with the District's laws would clearly help parents understand a lot about a school - and having teachers and parents serve on a school's governing board means someone could be asking hard questions early on. Remember, all I'm proposing in this bill is that we treat all public schools the same when it comes to transparency - and I want to ensure we take appropriate steps to help schools understand and manage the workload.

Amidon-Bowen ES and Eastern HS Students Doing Big Things! A quick shout out to the 4th grader at Amidon-Bowen who took second place in Math League State Championships. And a big congrats to the Eastern High School Track teams for taking the championship as 2019 DCIAA East-West Track Championships in both divisions. Finally, check out the amazing Eastern High School students who were celebrated on College Signing Day!

Is that Recyclable? WAMU ran a fascinating bit on how each jurisdiction is approaching the ever-changing nature of what can be recycled. Unsurprisingly, it's more complicated than you might wish it were. However, kudos to Zero Waste DC on making an easy-to-use website that lets you ask if something is recyclable or not. Very handy!

Tell the Dept of Parks and Rec What You'd Like to See - DPR has an open, online survey about what kinds of programming would interest you and your family. If they don't hear from you, it's hard to make programming decisions you're interested in!

Farmer's Markets are Back! Along with warm weather, rainy weekends, and Nats baseball, Spring also means the return of many farmer's markets in Ward 6. Check out Eastern Market's hours, as well as MarketSW and there are multiple FreshFARM markets operating around Ward 6 and the District.

Three Bills to Improve Parking are Funded in FY20 Budget - You might recall last year the Council passed two bills I wrote to address ongoing challenges related to parking challenges. One was a bill meant to close loopholes in abusing the temporary parking passes issued by MPD for residents. The second was a bill to give DPW and MPD greater enforcement to escalate fines against commercial vehicles who park illegally and chalk the flat-rate fine towards business costs. I'm happy to share that both laws are being funded in the FY20 budget, meaning they'll go into effect on October 1. And last, my Daytime School Parking Law has been funded, which will allow schools to use their limited physical space for playgrounds and fields and classrooms and work out an alternative for teacher parking.

Thanks as always and I hope to see you again soon!