We're rushing headlong toward the end of the year -- it's hard to believe 2019 is almost here! We've lit trees and menorahs, shopped at local businesses, put on our helmets to decorate the tree, and more. If you feel like you haven't gotten your share of local holiday cheer, there's still time to dive in with these holiday markets! But for now, we've packed A LOT into the final weeks of 2018 as the Council nears the end of its current session. Let's catch up on the latest:

12th Annual Brickie Awards - Best Ever?! The Brickies are Ward 6's annual party -- and this year was nothing short of outstanding! While it's wonderful to get together as neighbors and enjoy some food and drink from Ward 6 businesses, it's the chance to hand out some community awards that makes the evening special. This year, I honored the following folks for their contributions to making Ward 6 such a great place to live, work, and play: 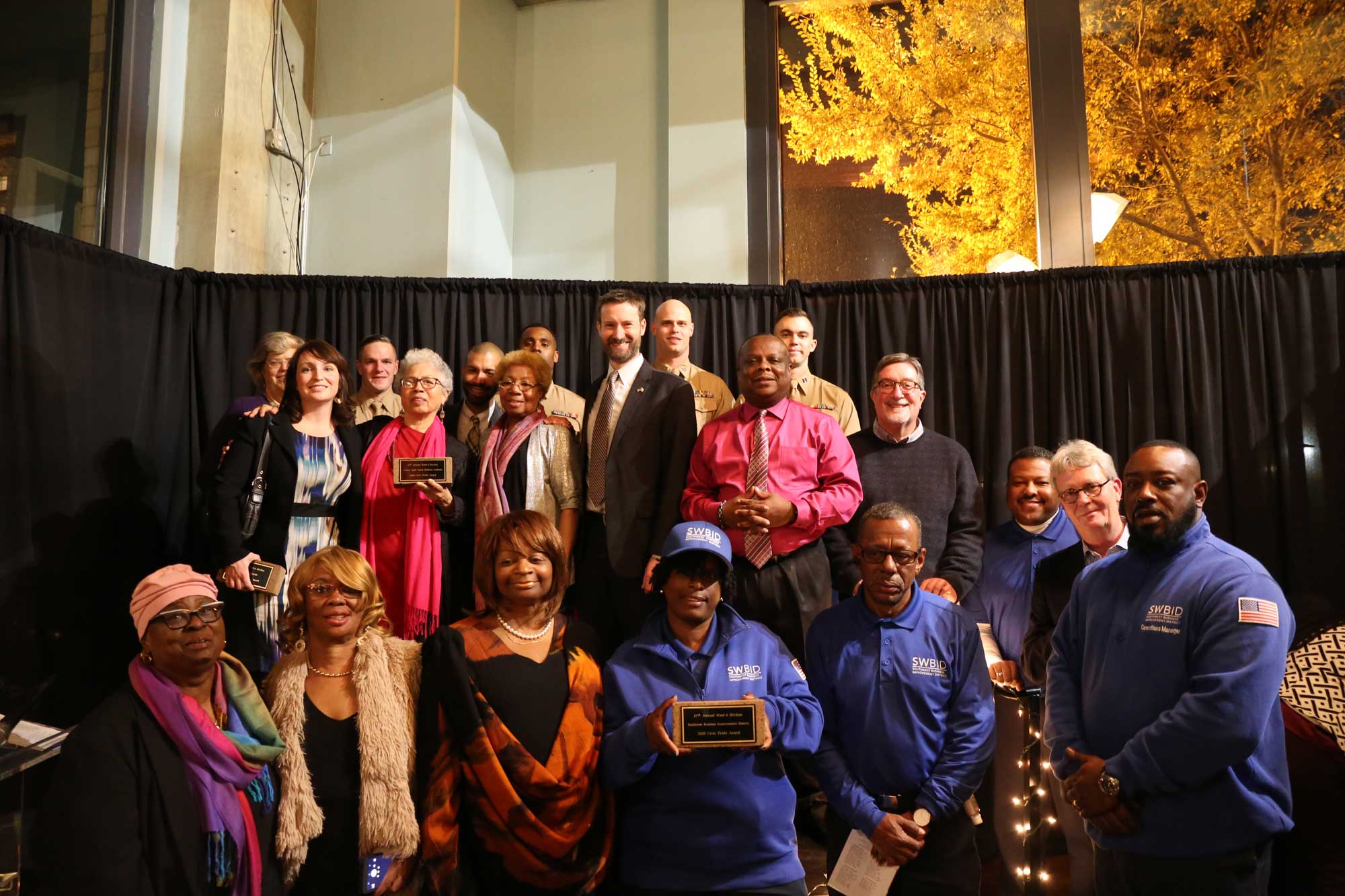 I want to give a big shout-out to the local businesses, organizations, and people who sponsored the event and made it happen. We depend on our sponsors who donate the food, drinks, and many of the little details that make it a great event annually for all of Ward 6 to enjoy.

From WaPo - campaign finance reform represents a 'sea change': Last week, the Council unanimously passed my bill tackling "pay to play" reforms. The Washington Post called it a "sea change." It puts in place strong restrictions preventing donations from companies who do business with the city to the elected officials who approve those contracts. It places restrictions on how long elected officials can leave their campaign accounts open and pay themselves back for loans once in office. And it creates more transparency around outside groups spending money to influence our elections. Here's the recap from the Post. 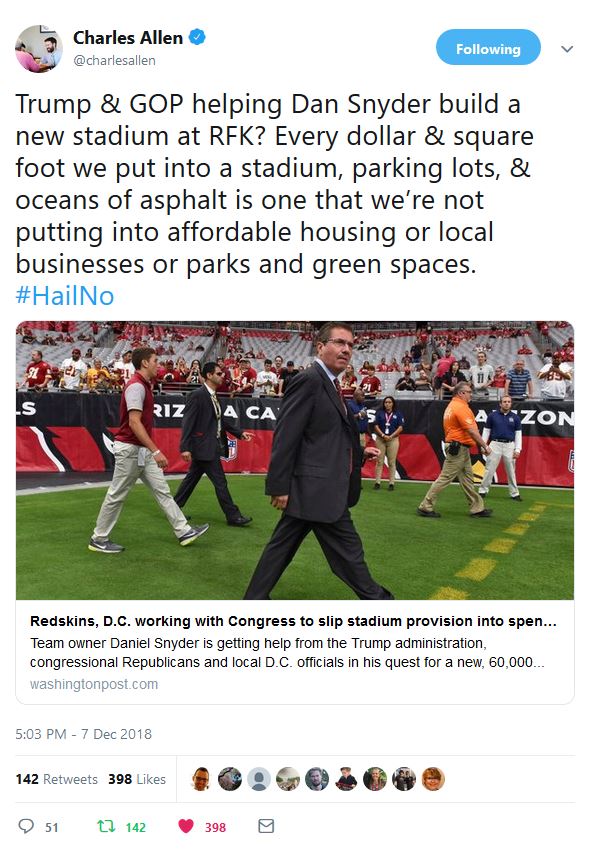 I oppose a new stadium coming to RFK. I need your help: News broke last weekend that the Washington Football Team and their billionaire owner Dan Snyder are working with members of Congress and a few District leaders to try to use the federal budget as a way to clear the way to build a new NFL stadium on the RFK campus - skipping key steps for the community to weigh in on how that space should be used in a new lease.

We are organizing against a new NFL stadium at RFK here - I'd love your support!

I can't begin to tell you how many problems I have with this. The 190-acre campus is in the process of turning 27 of those acres into new playing fields for the community after a six-year process, but that should only be the start of imagining what changes we could bring to the oceans of asphalt that have been there for decades. The site is a gem on the Anacostia River and should be active year-round and accessible to all residents - not given away for a 60,000 seat stadium (plus parking... lots of parking) that will host only eight games a year. If you agree, we need to organize to fight this plan. I do believe this federal land should be transferred to the District - but not for an NFL stadium. I'd rather we plan for a different vision - one with much-needed affordable housing, neighborhood-serving retail, parks, community access to the river, and other public amenities. I'm happy to help lead, but I'll need your voice and thousands more. Sign a petition here, ask your friends, family, and neighbors to sign on, and start saying #HailNo.

My Parent Playground Co-op bill is on track to pass: Facing a shut-down, by way of what I think was a bureaucratic over-reach, parents of the Capitol Hill Cooperative Play School reached out for help. Working with Chairman Mendelson and my Council colleagues, my bill will keep these critical parent-led playgroups open and thriving while still ensuring important safety expectations are in place. The legislation passed unanimously on first vote and will be up for a final vote on Tuesday, Dec 18, when I expect it to pass unanimously again. Quick hit story from WTOP on the bill.

Office of State Superintendent for Education reveals new rating system for schools: Last week, OSSE unveiled a star-rating system for each public school in the District of Columbia. While there are some very good data elements for parents found in the report cards, I don't support the idea of reducing schools to what amounts to little more than a Yelp rating, using a data framework many have criticized as overly penalizing schools serving higher need students. I think it overlooks a lot of the great work our principals, teachers, parents, and community partners are doing to improve every school. It's an issue I'll be keeping a close eye on moving forward. With the My School DC lottery open now, I encourage families to look #BeyondTheStars and visit schools that may be a great fit for their children regardless of ratings.  More from WTOP.

New DC Public Schools Chancellor nominated: The Mayor announced Dr. Lewis Ferebee was her pick to be the next DC Public Schools Chancellor. I haven't had the chance yet to sit down and meet with Dr. Ferebee, but look forward to talking with him soon. Here's a bit more about him from the Post. My colleague, Education Committee Chair David Grosso, announced plans to hold two hearings in the community (in Ward 1 and Ward 7) to hear from the public on Dr. Ferebee's nomination, followed by a confirmation hearing at the Wilson Building early next year. I'll be sure to share that info when I have it. 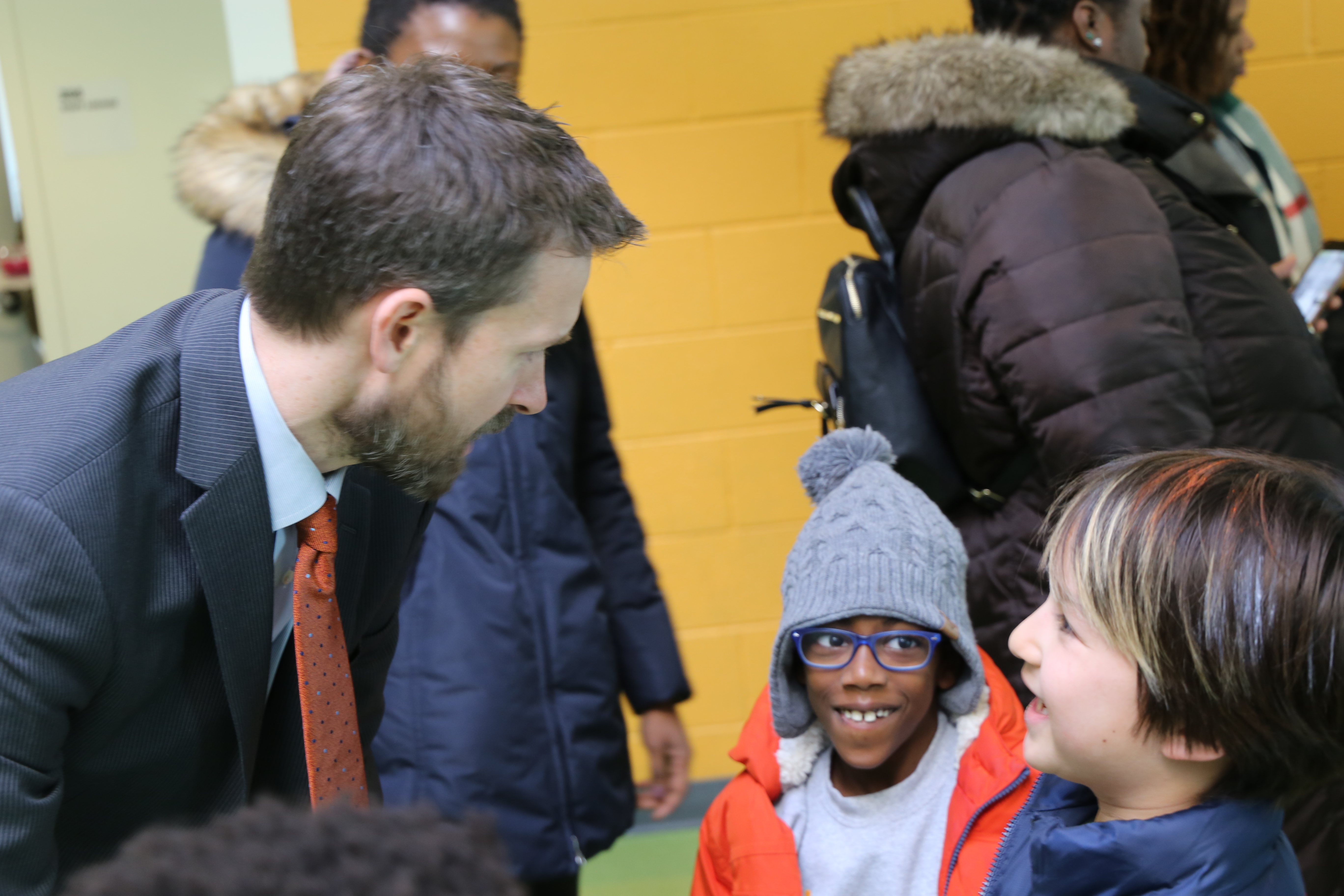 Two Rivers second graders ask great questions: Last week, I was delighted to be back with the second grade class at Two Rivers Charter School to talk about my work and to field questions (they had a lot of questions and ideas around litter). I always have a great time talking with tomorrow's leaders and doers and thinkers.

Two bills to improve traffic and parking advance unanimously: I am leading on two bills that would 1) crack down on illegal parking by food trucks and other commercial vehicles by escalating ticket fines in trouble spots, and 2) limit the abuse of our temporary parking permits, which is different from the visitor parking permit program DDOT runs. Both of these bills started because Ward 6 neighbors reached out to me with concerns happening in their neighborhood, so don't be shy when you have an issue and/or an idea to improve life on your street!

It shouldn't be this hard for deaf residents to enjoy a movie: Earlier this year, I proposed a bill that would require DC movie theaters to provide a certain number of showings each week with open captions as an accommodation for our deaf and hard of hearing residents, as well as our senior citizens, families with small children, and military veterans who may have lost some or all of their hearing. At a public hearing about the bill this week, we heard from many residents who were frustrated with current accommodations that often don't work, are cumbersome, and generally act as a deterrent to attending a movie. At the hearing, we had multiple ASL interpreters as well as technology that transcribed words directly onto screens to be as inclusive as we could. It was eye-opening to me to realize most aspects of daily life, including here at the Council, are basically inaccessible for the deaf and hard-of-hearing communities - not just in trying to catch the latest blockbuster release. More from the Washington Times.

Related: Here's a college scholarship for DC graduating high school seniors who are deaf or hard of hearing, deaf-blind, or have difficulty speaking for their post-secondary education. Pass along to anyone you know who could benefit!

Making fare evasion a civil penalty passes the Council: I helped lead the fight to make fare evasion on Metro trains and buses a civil penalty instead of a criminal one -- the law we've had on the books for 40 years says the fine can be as much as $300, 10 days in jail, and a lifelong arrest or criminal record. That's too severe a punishment for the offense -- soon it will come with a $50 citation. This is exactly how it works in Alexandria, VA - obviously already a part of our WMATA system. Here's a video where I laid out why I felt like this bill was so important. If you're worried about Metro's finances, I am too - as a daily Metro rider, I depend on a reliable and safe system to get me around the city. That's why I was proud to vote to commit $178 million annually to Metro's general fund in the last budget. I want to see everyone pay their fare to ride and I support Metro making smart upgrades that deter fare evasion. But I also don't want to see people lose out on future jobs, housing, loans, and more because they couldn't afford a $2 fare. So we fixed it.

Cracking down on high-capacity gun clips and a new tool for MPD: My omnibus gun safety bill passed on a first vote and heads for a final vote on Tuesday. At the heart of it, it's about getting guns out of dangerous situations fast and going after people who modify their guns with extended clips (to hold more bullets) and bump stocks (to shoot faster). I spoke with Fox 5 about my proposal.

Swampoodle Park is open in NoMa! Rejoice, NoMa and H Street neighbors -- Swampoodle Park is officially open and it was worth the wait! Ward 6's newest green space has a super fun playground space, a dog park, and plenty of seating, tucked right in the middle of the neighborhood. I highly recommend a visit. And while you're there, if it is dark out, head over to the bridge at M Street right by the south NoMa Metro Station entrance and treat yourself to the public Rain Art exhibit.

Community Office Hours will return in 2019: Over the holidays and into January, I'll be taking a break from my regular Friday morning office hours. Certainly reach out to me or contact my staff (which is usually faster if you have an urgent issue) if we can be of help. Thank you to the many Ward 6 neighbors who came to talk with me at an office hours event -- 2018 was filled with many great Friday mornings talking over coffee!

Please note: my offices will be closed the week of December 24 through New Year's Day to give my staff (and me) a breather after a very busy Fall. I hope you and your family have a wonderful holiday season and wish you all the best in 2019!