December is always a busy month with so many great events, from tree lightings to winter celebrations to holiday markets to our very own annual Ward 6 Brickie Awards. All of them are opportunities to get together as neighbors and enjoy the people and places that make our community special. Let's jump in because there's A LOT of really great news to share.

The 11th Annual Brickie Awards - Biggest and Best Yet! I can't believe how much this annual Ward 6 celebration has grown since its start back in 2007 by then-Councilmember Tommy Wells. The Brickie Awards recognize and honor exceptional neighbors, businesses, and organizations with an engraved brick to celebrate their special contribution to the community. Our honorees this year included: 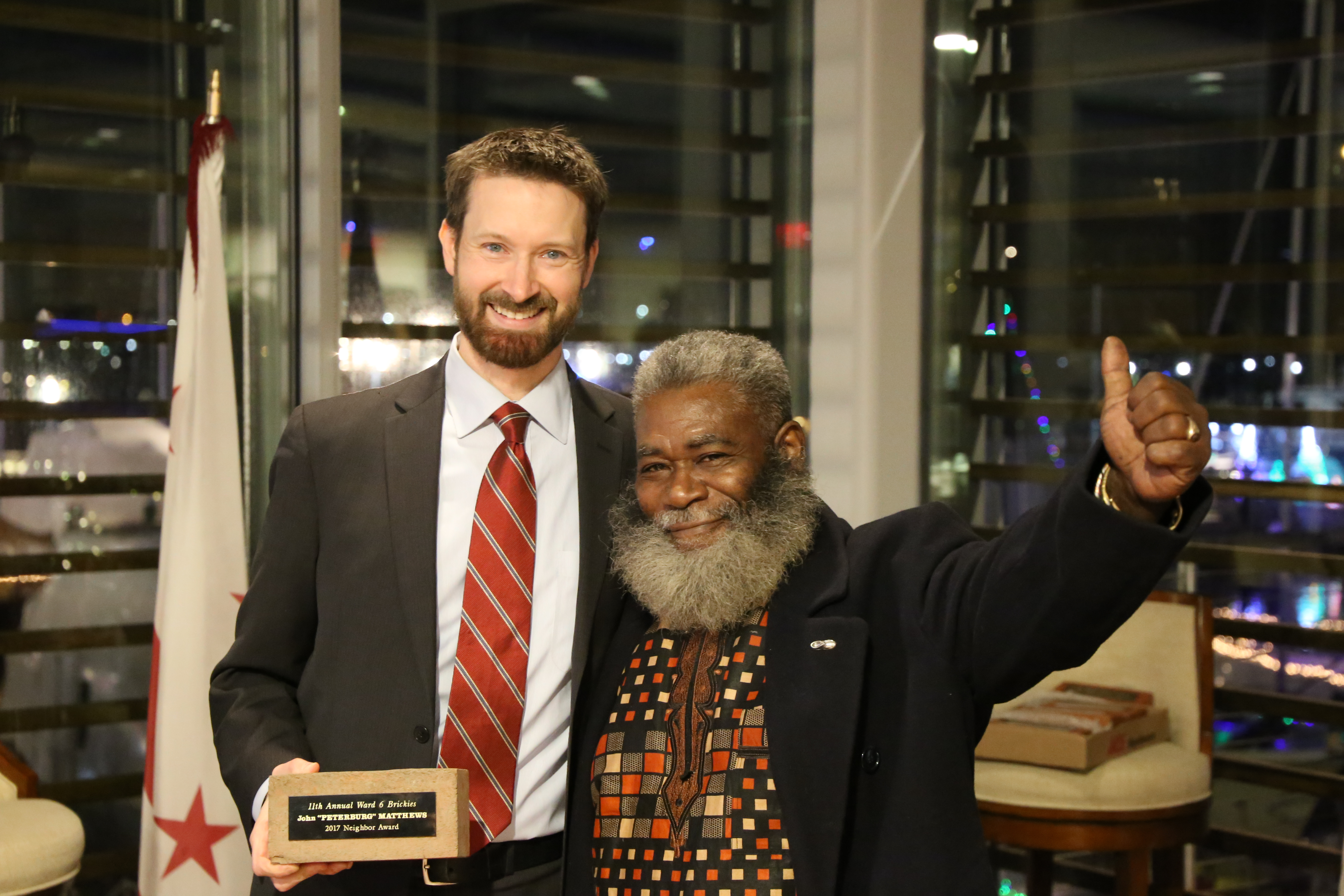 We held this year's event at the Capital Yacht Club's beautiful new home at the District Wharf. My thanks to the Capital Yacht Club, who is celebrating their 125th anniversary on the Washington Channel, for hosting us, as well as to the many District businesses and organizations who sponsored the celebration with donations of food, drink, and more. If you missed the Brickies or have never been before, plan to join us next year! Check out more photos here.

Taking action to combat rats - There was a public hearing last week on my bill to provide new tools to the District in fighting the rat population (if you missed it, you can still submit written testimony until December 20 to the Committee on Health here). This is a serious issue across the Ward and city, and my bill attacks the problem by looking at waste and trash from businesses and arming the Department of Health with better oversight and enforcement. We also heard some great ideas from neighbors on ways to further strengthen the bill. Both NBC's Tom Sherwood and CBS's John Henry covered the hearing and explored how the legislation would help address some of the underlying issues.

Four-Way Stop installed at 10th and Massachusetts Avenue, NE - I am happy to share that DDOT has finally installed a long-requested four-way stop at 10th Street and Massachusetts Avenue, NE. This intersection has long been dangerous for pedestrians, cyclists, and car traffic. Working together with ANC Commissioners and neighbors, we've made some progress with DDOT to install new crosswalks and stop signs at a number of locations around the Ward, but there's still a long list of intersections that should be converted to all-way stops to improve safety. I've been impressed by the new head of DDOT, Jeff Marootian, and his willingness to focus on the local needs of Ward 6. In his confirmation hearing last week, I used my questions to push Mr. Marootian to focus DDOT on being more responsive to neighborhood concerns where traffic poses very serious danger to residents and to make those changes faster.

Seven Ward 6 educators recognized with Standing Ovation Awards - Ward 6 public schools have been making big strides for years now, and the folks at Standing Ovation for DC Public Schools are taking notice. Seven educators from Ward 6 schools were named 2018 recipients, which includes a grant award and recognition at the DC Public Education Fund's annual celebration (February 8 at the Anthem at the District Wharf). Congratulations to each of these great educators and their respective schools -- I am delighted to join DCPS Chancellor Antwan Wilson in recognizing their dedication and excellence. The 2018 Standing Ovation Excellence Award winners include:

My School DC lottery for 2018-19 school year now open - Visit the website for more information and to register your student for the lottery. 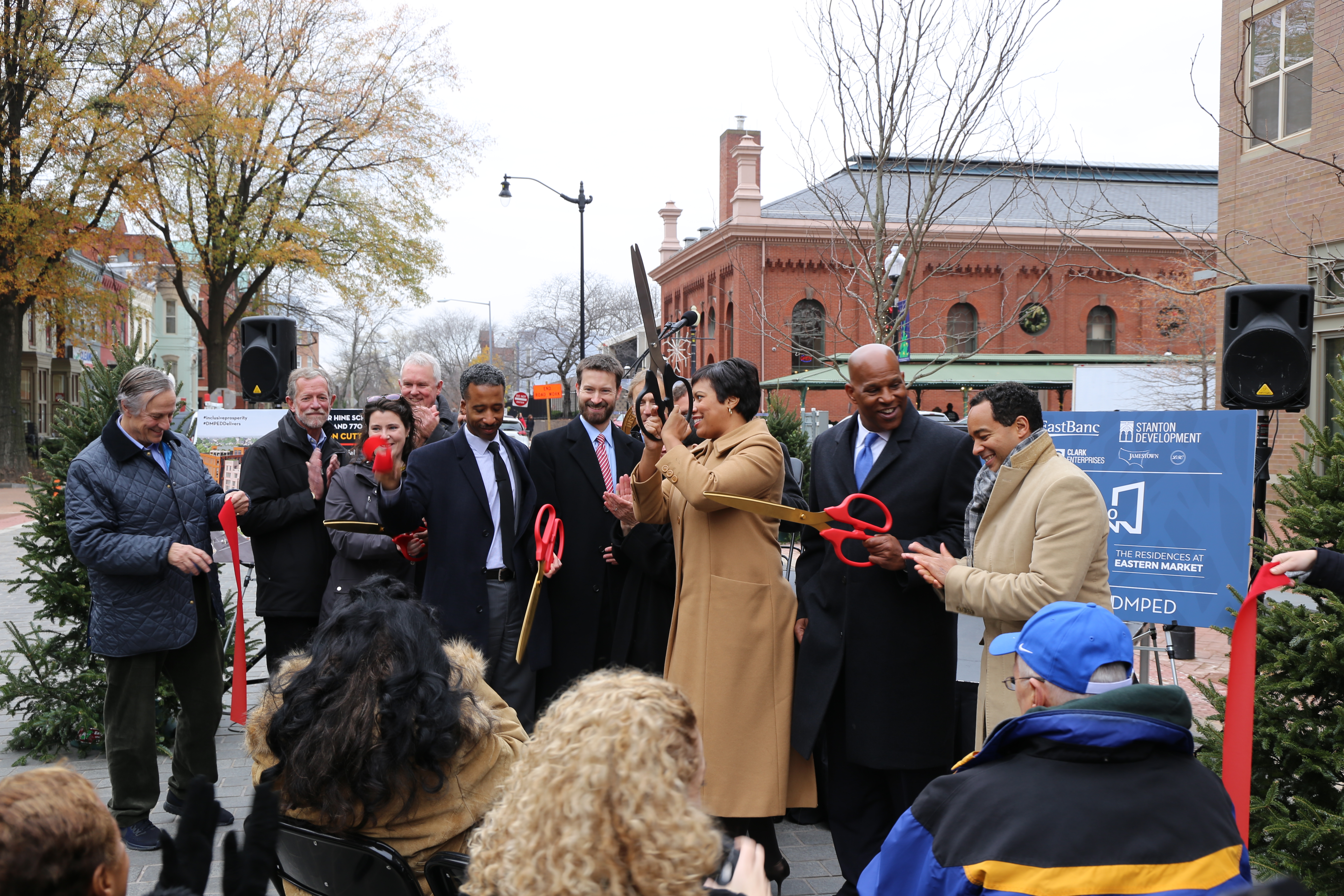 Cutting the ribbon on the Hine School Redevelopment - On Tuesday, we cut the ribbon to officially complete the Hine School Redevelopment Project, the latest addition to our Eastern Market community. The project brings 46 units of affordable housing for families, dedicated senior housing units, market-rate housing, 60,000 square feet of retail space (including 20% dedicated to District-based small businesses), and an outdoor plaza. It also re-opens C Street, where outdoor vending and markets will take place on the weekends. Special thanks to past and current Commissioners of ANC6B and the Community Advisory Committee for working together to ensure this project responded to the needs of the community. Head to my Facebook page for a few photos from the chilly ribbon cutting.

Metrobus adds new service to Southwest - I've been working with the Southwest Transportation Strike Force to improve transit in the neighborhood. This week WMATA announced some changes to the 52 line that will extend new bus service to Southwest and include connections to Metrorail stations and the District Wharf. The changes will take effect this Sunday, December 17.

DC women will not pay extra for basic health care if the ACA is repealed -- Earlier this month, the DC Council unanimously supported my bill to permanently protect the women's health care benefits covered under the Affordable Care Act by requiring in local law that all health plans sold in DC to include those benefits (and more). The Washington Post wrote about the bill, which is now before the Mayor, and what it means for not just women, but all DC families. We've seen President Trump and Members of Congress try over and over to gut the Affordable Care Act and drop important patient protections, and I didn't want to wait for a worst case scenario. The measures this legislation will put in place lock-in and protect critical healthcare benefits for DC women.

We are closer than ever to publicly-financed campaigns in DC - I am passionate about ensuring our election process is as open and fair as possible. Our local democracy depends on moving away from a focus on big-dollar donors and instead making sure the voices of everyday residents can speak just as loudly. Yesterday, we took another step forward as my colleagues on the Committee on the Judiciary and Public Safety voted 5-0 to move the Fair Elections Act to the full Council for a first vote next week (WAMU has the story). If you're curious why this bill is so important, we broke it down in a twitter thread here. 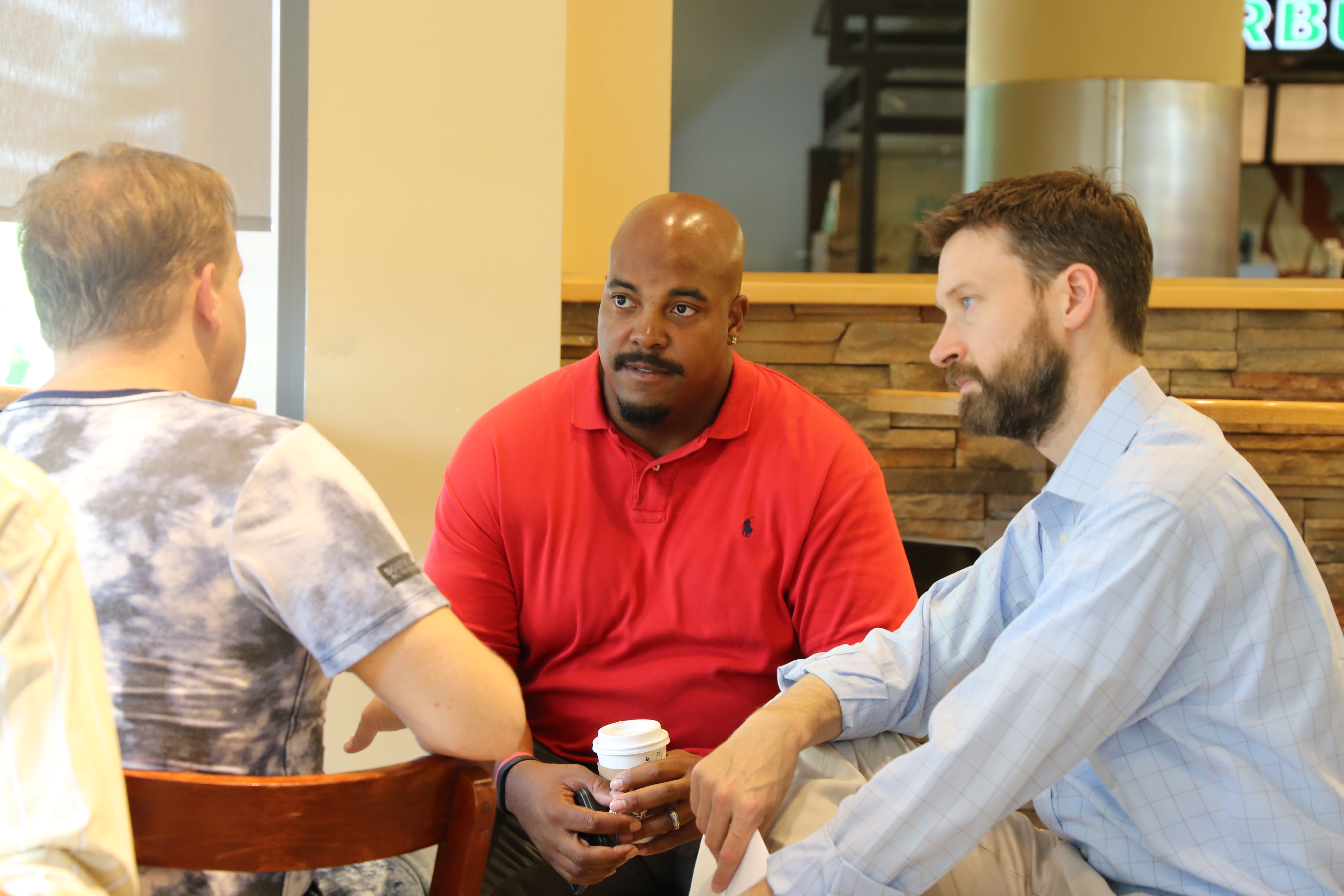 Thank you to my Constituent Services Director Jamaal Jordan - Many Ward 6 residents have met, emailed, or talked with my Constituent Services Director Jamaal Jordan. He's been with me at nearly every single Friday morning office hours I've held since taking office and nearly every community walk and many neighborhood meetings. It is bittersweet to wish him all the best as he moves on to another great opportunity -- a job he earned with years of hard work, including many late nights and weekends, to help neighbors and communities with a wide range of concerns. His are big shoes to fill, but Jamaal's departure means we're hiring for another great Constituent Services Coordinator. Do you love solving problems? Do you enjoy unraveling complicated issues? Do you love working with government to deliver on what neighbors need? Let me hear from you if you're interested and we can get you more information.

Also in bittersweet departures, our wonderful 6B07 Commissioner Aimee Grace is resigning - As first reported in the Hill Rag, Aimee Grace announced she'll be ending her term as ANC 6B07 Commissioner early as she and her husband make a major move to Hawaii to be closer to family. I have valued Aimee's leadership and working with her on behalf of her residents and neighbors. All the best to Aimee and many thanks to her for her hard work and dedication to her community!

A plug for local media - Long-time NBC4 reporter Tom Sherwood announced he's stepping back from NBC4 yesterday after more than 25 years on the beat. He'll still be on the Friday Politics Hour with Kojo Nmandi on WAMU. Tom is affectionately known as the Dean of the Local DC Press Corps -- a title he has earned thanks to many, many years covering DC government. And last month, local news site DCist was suddenly and unexpectedly shut down. While these two news items are quite different, both serve as a reminder of the importance of a healthy and active local media corps to hold DC's government and elected officials accountable. From our own Hill Rag attending every ANC meeting and covering your block all the way to the local TV stations, public radio, and the Washington Post, just be sure you take time to support and follow our local media. They're doing important work.

My last office hours of 2017 is tomorrow, Friday, December 15, at The Pretzel Bakery in Hill East. I'd love to talk with you over a cup of coffee and hear what's on your mind as we head into 2018.

As the Council heads toward a brief recess the week between Christmas and New Year's Day, I wish you and your family a very warm and happy holiday season. Thank you for reading and please let me or my staff know if we can be of any assistance.