Wow, the fall legislative session is in full swing and there's a whole bunch happening. Of course, the two major votes last week on Initiative 77 and short-term rentals captured the attention of many residents, but you can expect to see a lot of important bills moving this fall as my colleagues and I race to the end of this legislative period on December 31. Still, even as some of the tough issues can divide us, I've been incredibly grateful that many residents have engaged in thoughtful debate and worked with their neighbors and my office to improve our community. Let's jump in to some of the big issues: 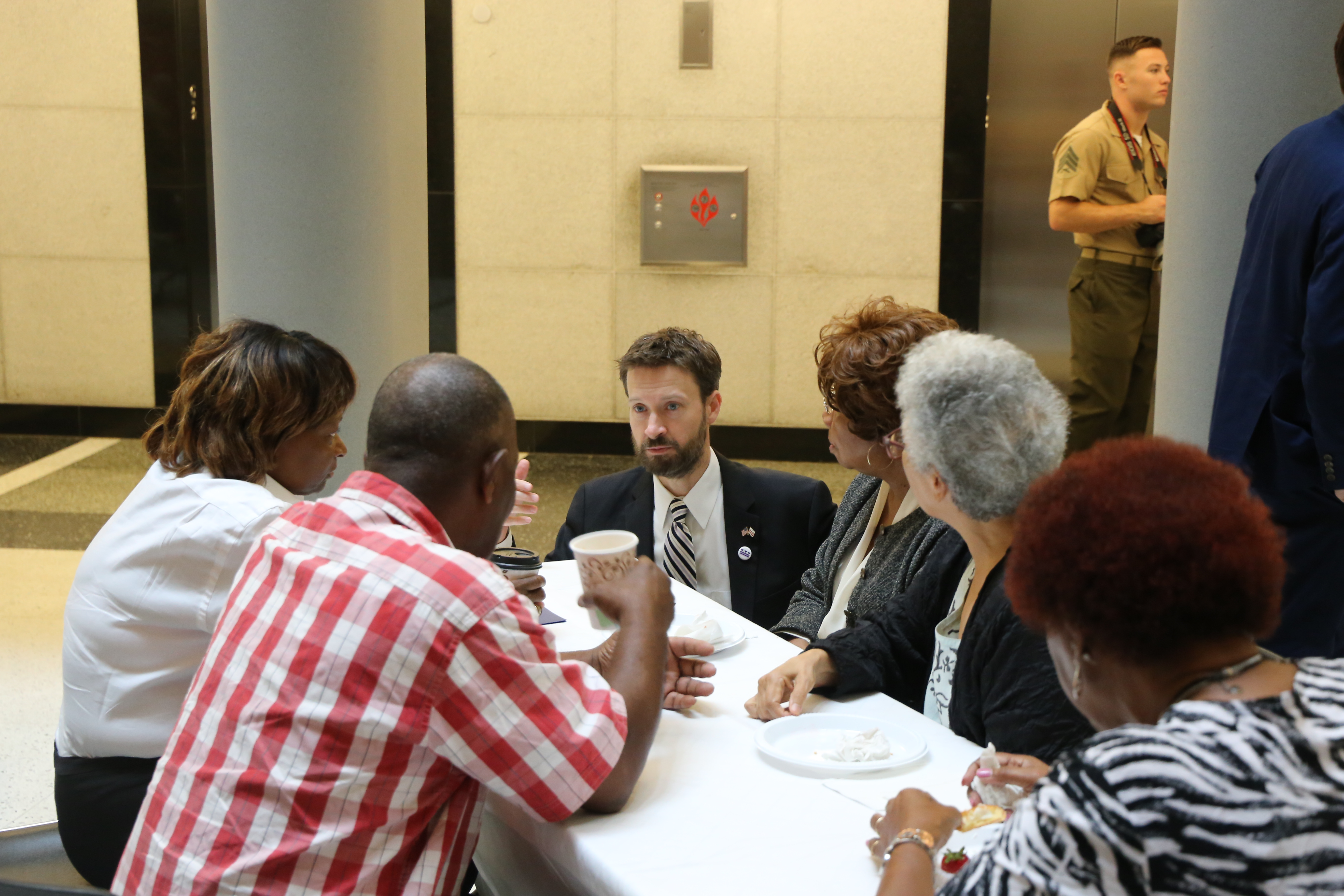 Helping Arthur Capper Seniors: It has been almost three weeks since 160 residents in the Arthur Capper Senior Building lost their homes and almost all of our their possessions in a tragic fire. Since then, my team has been working around the clock with these neighbors in partnership with the Department of Human Services and the Office on Aging. The response from Ward 6 has been incredible. Now that all of the residents are safely into hotels or staying with family and the most immediate needs have been met, we can turn to helping connect the many generous offers of help -- ANC 6D is taking the lead in coordinating volunteer opportunities to help our seniors.

On Wednesday, October 25, I will hold a joint-oversight roundtable to examine the District's response to the Arthur Capper fire. Information on the roundtable and instructions on how to testify here.

Related: Last Tuesday morning, I was delighted to host a breakfast at the Wilson Building for some of the Arthur Capper seniors, Marines, neighbors, and first responders.

First vote on short-term rental (Airbnb) legislation: Last week the Council held a first vote (remember, we vote on everything twice) on legislation to regulate short-term rental companies like Airbnb and VRBO - I wrote a longer post on Facebook with my thoughts and explaining where the bill stands heading into a second vote. Overall, I think it's important we are putting a regulatory framework in place but I have concerns about the bill, which the independent CFO estimates will eliminate 90% of current short-term rentals. Right now, the bill will allow unlimited short-term sharing in your primary residence while you are present, but gets pretty restrictive after that. On Tuesday, I offered a very simple amendment that lost 5-8, showing me the votes for bigger changes to the bill aren't there yet - recap of the vote in the Hill Rag. I'll keep working on it and I appreciate the many residents who have reached out so far to share their views. 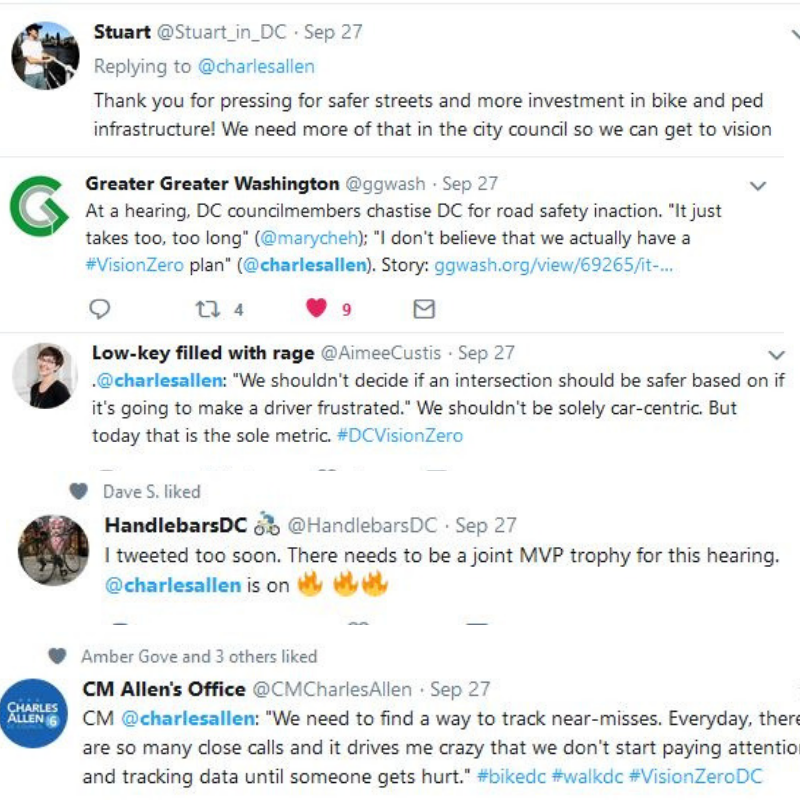 Where is the urgency on Vision Zero? Two weeks ago, I co-chaired a hearing digging into the District's Vision Zero initiative with Councilmember Mary Cheh -- the hearing followed two traffic deaths over the summer and there were two more in the weeks leading up to the hearing. Just last week, a pedestrian was struck and killed crossing the street. Vision Zero aims to have zero traffic-related deaths in DC - be it in a car, on a bike, a scooter, or on foot. From everything I've seen, the District is not doing nearly enough to move toward this goal, which should focus on improved road designs that curb dangerous driving, stepped up enforcement on everything from speeding to illegal parking or stopping in bike lanes to running red lights and blocking crosswalks. It still feels to me (and many more people based on testimony and conversations on Twitter) like travel by car is the priority whenever DDOT plans our streets and prioritizes projects. More on the hearing from WTOP.

Initiative 77 Update: A few days before it came up at our legislative session last week, I shared an update on how I would vote on a bill that proposed repealing Initiative 77, a voter-passed ballot measure to eliminate the tipped minimum wage. I supported a compromise amendment that failed, and I voted against the bill to repeal, which ultimately passed 8-5. This was a tough issue that District residents have wrestled with and advocated for with passion on both sides. I want to thank the many tipped workers who shared their stories with me, as well as the many Ward 6 residents who reached out. I heard from hundreds of people who had carefully considered their position before voting and talked with me about modifying, amending, or improving the initiative, but said loud and clear that repealing the bill sent the wrong message. In the past, I have asked Ward 6 residents to join me in saying "Hands Off DC" and I've worked very hard to expand voting rights and bring more voices into our elections. To me, it was a matter of principle that I couldn't ignore the voice of DC residents. I was glad to see the repeal bill did adopt some language from our proposed compromise that strengthened wage theft laws, implemented sexual harassment training for managers, and a few other measures that I hope help address the issues this debate has raised.

Education Update - planning our public school facilities and the DCPS Chancellor Search: The Office of the Deputy Mayor for Education has been leading the process to update the District's Public Education Master Facilities Plan, a document that will guide strategic priorities and spending for years to come. There will be two upcoming Community Engagement meetings this week on Thursday and Saturday -- find details on the meetings and more information on the MFP process here. Also underway is the Mayor's search for the next Chancellor of DC Public Schools. I have held two community meetings with Ward 6 residents on the search process and their priorities for the next Chancellor. After listening to their feedback, I shared this letter with Mayor Bowser. If you'd like to reach the Search Committee directly with your thoughts, they have an online survey open now here.

K2 is hurting our neighbors: Since December, I've been working with Attorney General Karl Racine to update our laws around synthetic drugs, otherwise known as K2 or spice. The District has seen a rash of overdoses and deaths from several dangerous mixtures sold illegally. The Council passed our bill that targets the dealers and gives law enforcement new tools for prosecution of those who are spreading this dangerous drug to our residents. Here's a recap on the bill in WaPo.

Helping victims of trafficking: Last week, the Council voted unanimously on a bill I wrote that would make it easier for victims of human trafficking who committed some crimes under duress to apply to vacate their criminal record. These victims would still have served their sentence, but now live with the burden of a criminal record despite having likely feared for their safety if they did not comply. It's a difficult situation, but this law will give them some hope of getting back to normal. I sat down with WUSA Channel 9 to talk about the bill.

Not paying bus or metro fare shouldn't land you in jail: Right now, if you don't pay your bus fare or metro fare, it could potentially result in up to a $300 fine, 10 days in jail, and a lifelong criminal record. I moved a bill through my committee that would make the offense a simple $50 fine, similar to if you didn't pay for parking or litter. You still have to pay to ride - and there are consequences if you don't - but decriminalizing fare evasion will go a long way toward making our public transit system more just. In reviewing more than 20,000 stops, the Washington Lawyers’ Committee found 91 percent of those cited or arrested were black, with 46 percent of those enforcement actions against black men under the age of 25. Of course, viral videos of over-the-top enforcement for fare evasion only drives home the reality that enforcement can quickly get out of hand over a $2 fare. I wrote an op-ed in Greater Greater Washington if you want to dig into the issue more.

Follow me on Instagram: Just a quick plug to follow my Instagram page if that's your social media go-to. I'm getting the hang of it and I want to keep you informed where it's most convenient.

Friday morning office hours are back! I'll be at Radici near Eastern Market this Friday at 8 am for community office hours. This is time I set aside to be sure community members can talk with me about any issues that come up in the neighborhood or at the Council. Come by before you start your day and have a cup of coffee with me. If you missed me at last Friday's office hours in Mt. Vernon Triangle, RSVP to upcoming office hours and you'll get a reminder email a few days in advance.