This past Monday marked the 11th anniversary of the fire that burned Eastern Market. That was a tough day. But, there's a reason Eastern Market is the longest continuously operating farmer's market in the city. We came together as a community and we rebuilt. Today the market remains a vibrant part of Capitol Hill and DC. As we mark that milestone, I'm working hard to ensure the future of Eastern Market is secure in our upcoming budget. 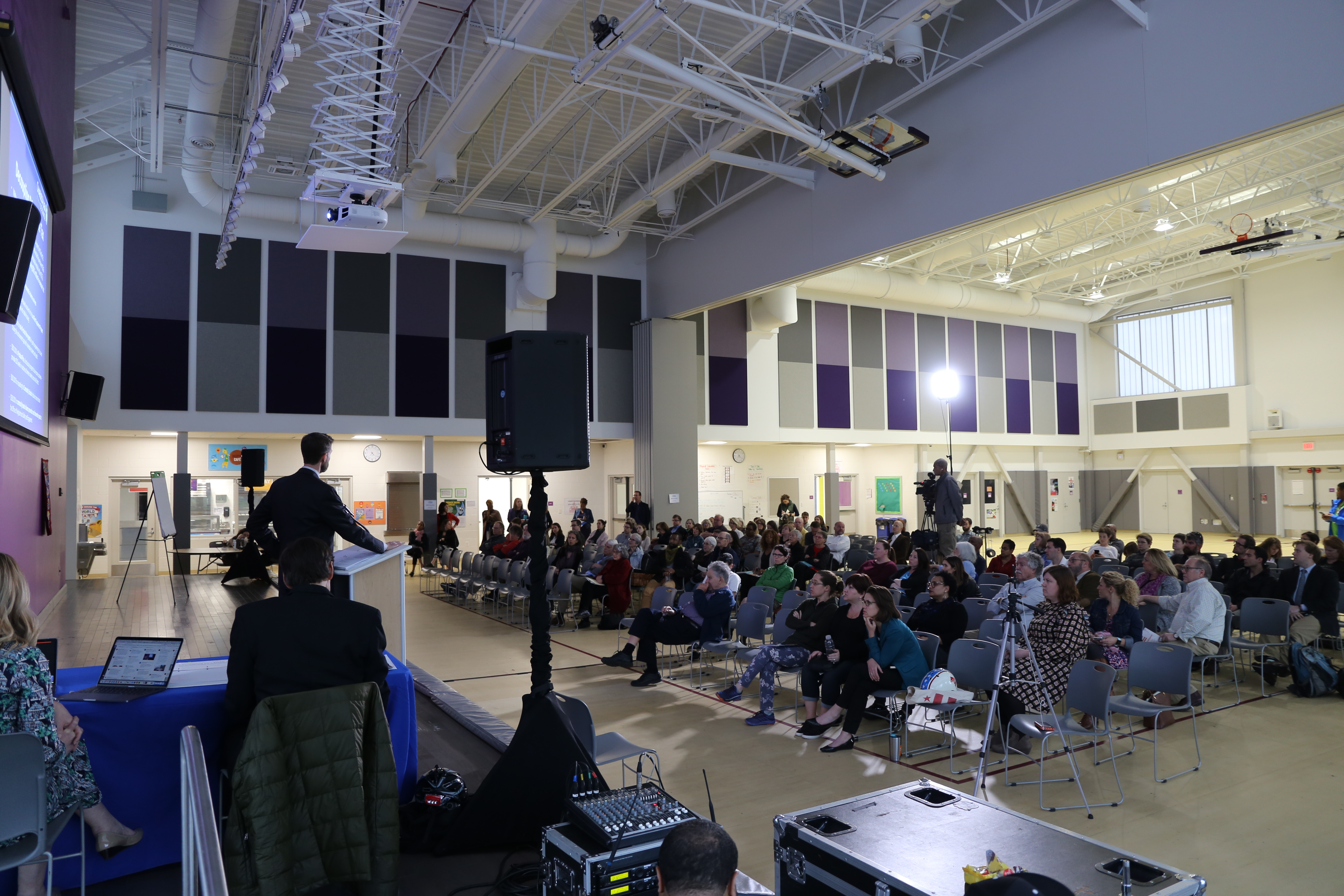 Another excellent Ward 6 Budget Town Hall in the books: Thank you to the many neighbors who spent a Monday evening with me and my staff to share their priorities for the upcoming budget, as well as their concerns. We covered a lot of ground in a little over an hour and a half, but there was a great discussion on school funding, affordable housing, homeless services, taxes, local businesses, parks, libraries, and much more. If you missed the town hall, there's video on my Facebook page and my presentation is available here.

Part of Reservation 13 breaks ground in Hill East: It's been a very long road, but work is finally underway on parcels G-1 and F-1 of Reservation 13. If you aren't familiar, it is 67 acres of land at the eastern edge of Capitol Hill and the Anacostia River. The new development will bring 104 affordable units, 52 of which will be for residents earning less than 30 percent of the area median income and 52 for residents earning up to 60 percent. The space will also bring more than 30,000 square feet of retail space and an underground parking lot. I've been proud to work with Hill East neighbors to ensure this project reflects what the community values, and I'm excited we're finally beginning to see it take place after a process that began way back in 2002! The Hill Rag has more on the story. 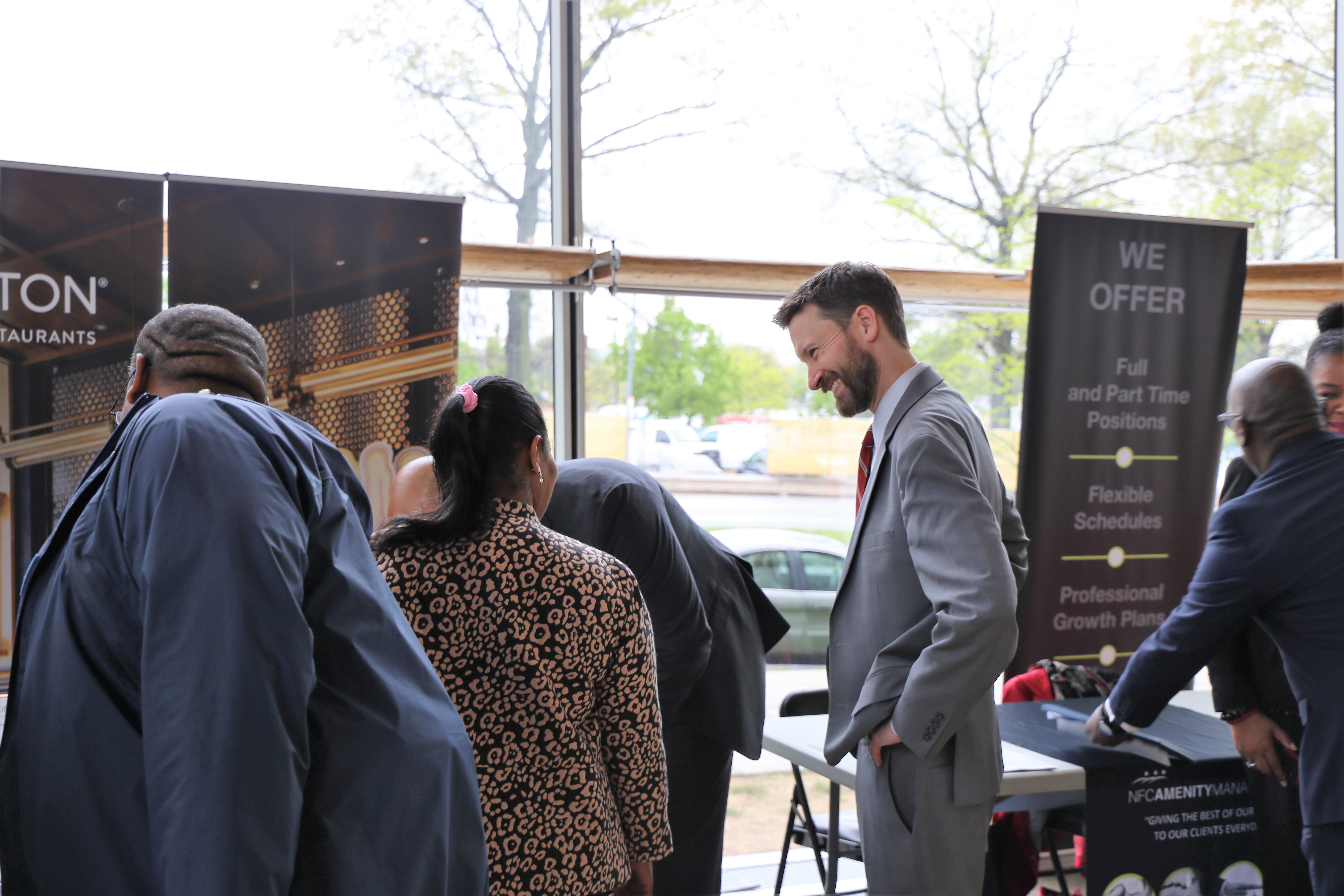 Connecting employers with job openings to DC career-seekers: Last Friday, hundreds of District residents met with 42 employers at the 11th semi-annual DC Career Fair - the most employers we've ever had attend. I was joined by two of my At-Large colleagues, Councilmember Elissa Silverman and Councilmember Robert White Jr. to host this Career Fair. This Career Fair dates back to before I joined the Council, and I've been proud to continue it as a service to help Ward 6 residents find a new career. Many thanks to Arena Stage for providing such an inspiring space to help our neighbors find a new career. I posted a few photos on Facebook from a day when many people booked a job interview!

I introduced a bill to protect our rental housing stock and tenants: On Tuesday, I introduced a bill that would disincentivize developers from downsizing multi-unit buildings to protect the total number of units in the market. It would also add a protection for tenants evicted by homeowners under the guise of using the rented space for themselves, but then renting the same space again within one year. All fees collected would be directed As our city grapples with an affordable housing crisis, we need to take steps to ensure we are growing, not shrinking our rental market. Additionally, the bill adds protections for tenants who are evicted by a landlord under the premise of the landlord using that space for their own use, but then renting out the unit once again. Right now, this is against the law in the District, but there is no mechanism for tenants to seek recourse. More on the bill on my website. 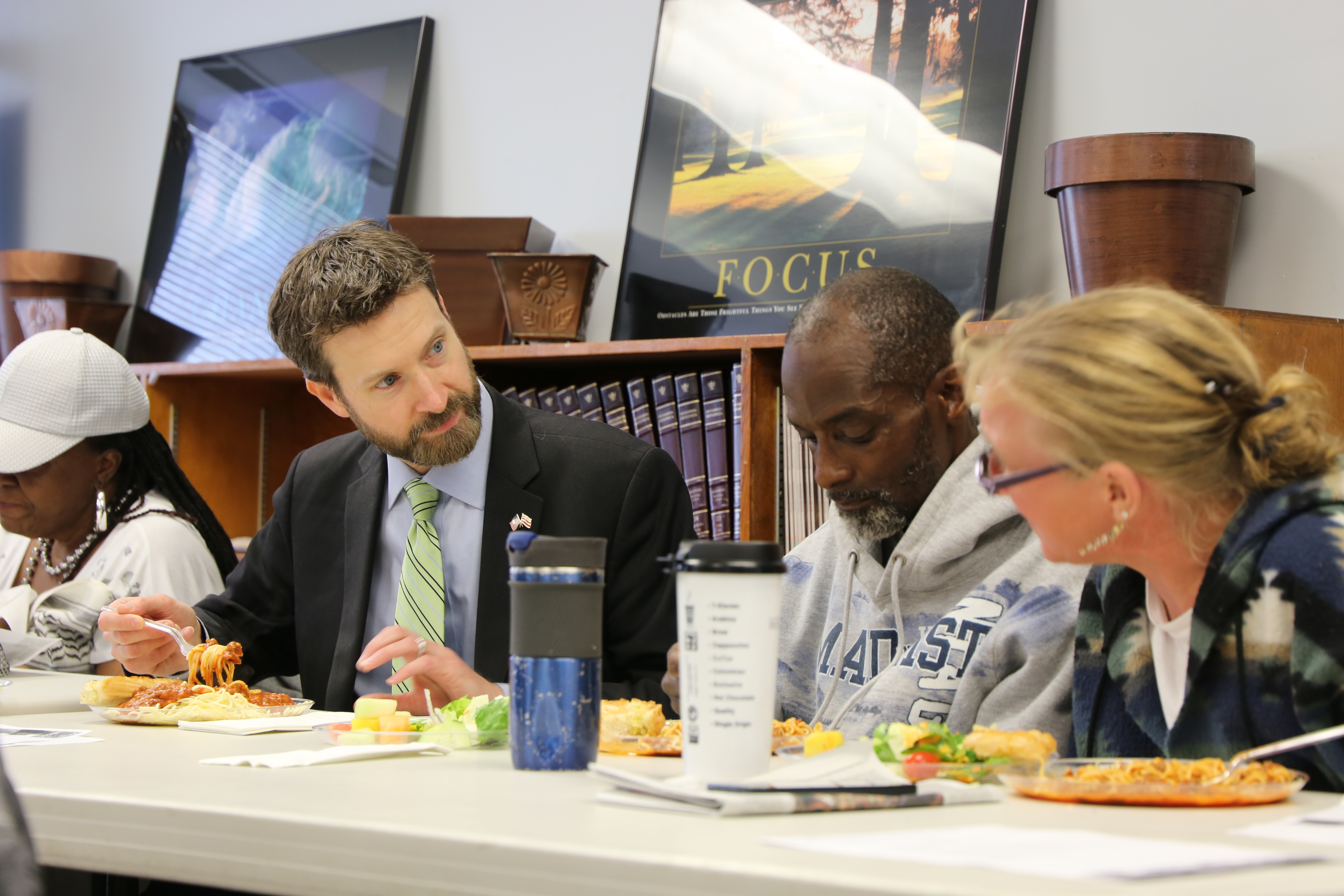 Talking climate change with James Creek residents: Last week, I had the pleasure of joining residents of James Creek in Southwest for a spaghetti lunch and discussion on climate change, hosted by the Earth Conservation Corps​. While there were several presenters from the District and organizations working on climate change, I enjoyed the discussion with residents concerned about the health, air quality, and pollution in their communities. I wrote the law that created DC's Commission on Climate Change and Resiliency, I've led on efforts to grow DC's tree canopy, and move the District's energy grid toward more renewable energy sources. The District's Solar For All program is one example of trying to ensure all DC residents can take part in bringing renewable energy sources to their home.

There are 14 electric Circulator buses hitting the road this week: This week, the District of Columbia launched 14 buses, giving the District the largest electric bus fleet on the east coast. This is an exciting and important development - these buses require less maintenance, run much cleaner and quieter, and move the District away from using diesel fuel. Greater Greater Washington has more on these buses. If you're looking for some extra reading on the topic, Bloomberg has looked at how the growth of electric buses internationally is shifting the oil market.

Smithsonian Anacostia Museum Exhibit: If you haven't visited the Smithsonian Anacostia Community Museum recently, now is a great time to go and check out their newest exhibit, A Right to the City. A few of my staff visited recently and came back raving about their experience. It explores the change, growth, and struggle of residents in six  District of Columbia neighborhoods, including Shaw and Southwest, to protect their homes and fight to have a say in their community.

OSSE is updating their school report cards: The Office of the State Superintendent for Education is wrapping up a community survey on their newly-designed school report cards, which help parents and prospective parents get a snapshot of the school in one place. The survey is only open until Friday, so don't hesitate if you want to have your say!

Introducing new staff on my team: I've added three new great staff members to my team - two will be working on constituent services and Ward 6 issues, and one is new to the important work of the Committee on the Judiciary and Public Safety's mission to ensure DC is a safe and just city. As a reminder, you can reach any member of my team from my website.

Kimberly Kennedy - We stole Kimberly from Frager's Hardware (thanks!) to be our new Constituent Services Coordinator - she's been a part of Ward 6's community for many years and brings a lot of great energy to working directly with her neighbors.

Jen DeMayo - Jen joins our team on a part-time basis, assisting with special projects and events throughout the Ward. She's long been an active and engaged Ward 6 parent and volunteer at many community events. Jen helped found Mothers On The Hill (MOTH), so we love having her expertise in-house.

Kevin Whitfield - Kevin has joined the Committee on the Judiciary and Public Safety as a Policy Adviser, and will handle a criminal justice portfolio. He comes to us from the Columbia, SC Public Defender's Office and brings valuable experience to our work with community policing and justice issues.

I did an interview on the Council's new radio show: It's available as a podcast. It isn't the most hard-hitting interview I've done, but credit to host Josh Gibson who asked me some new questions on my background and how I ended up at the Council. I had fun and if you'd like to get to know me a little better, you can download the podcast on iTunes or SoundCloud. 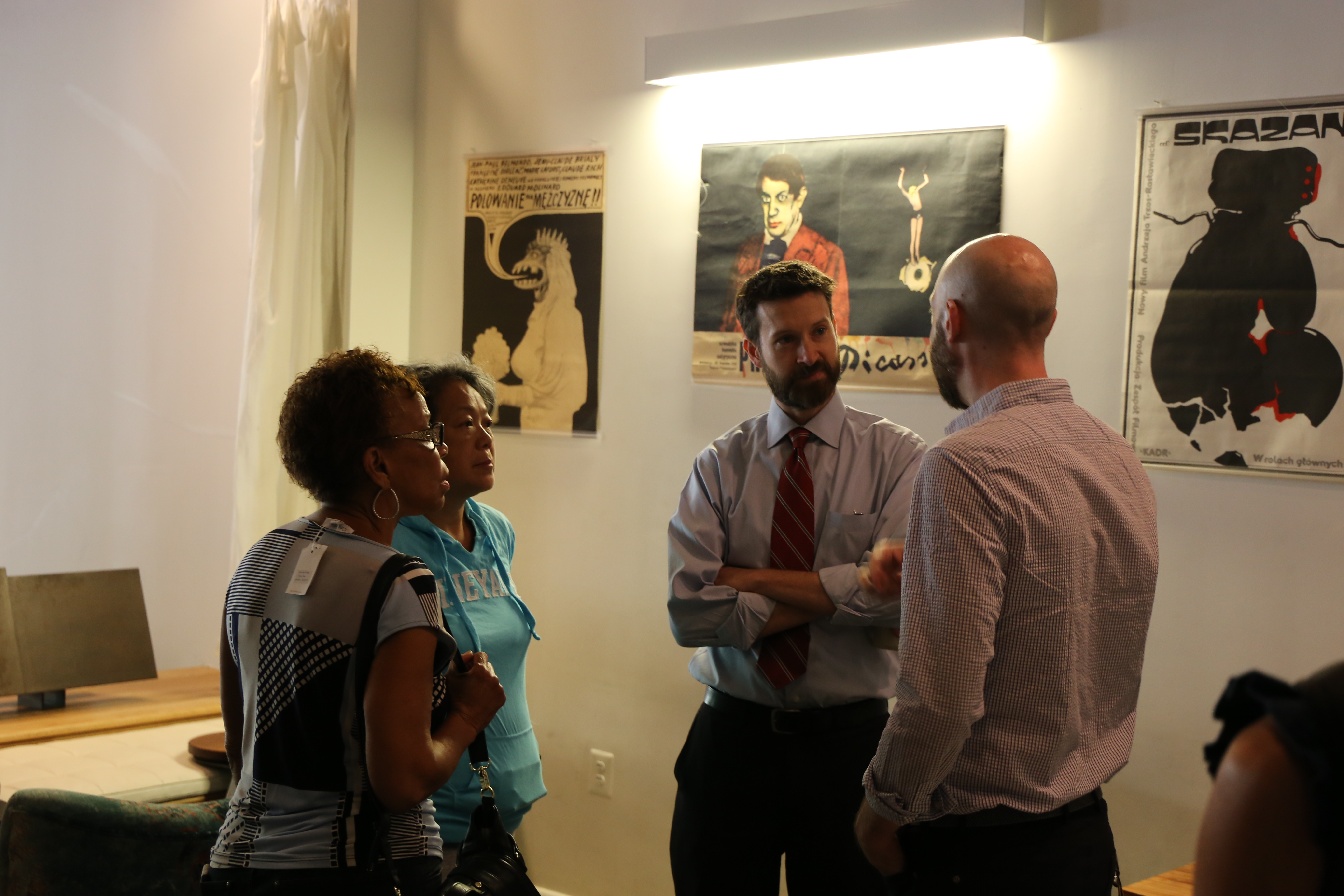 Next Office Hours are in Mt. Vernon Triangle: I'll be heading back to A Baked Joint this Friday morning from 8-9:30 am for my regular office hours. I'd love to talk with you over a cup of coffee about any issues in your neighborhood.