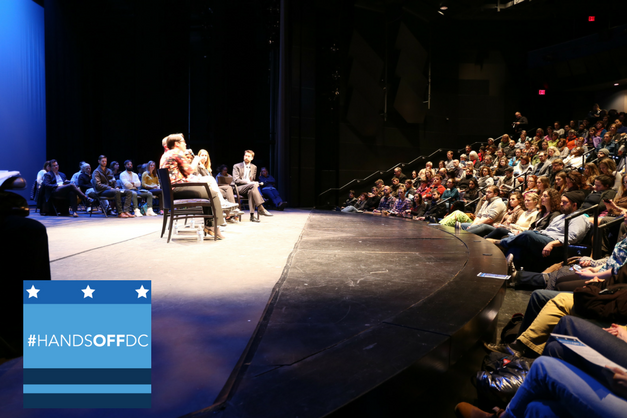 One year ago this week, more than 1,000 neighbors gathered together at the Atlas Performing Arts Center and nearby H Street Country Club to start organizing to protect District laws and values, saying "Hands Off DC." We were tired of Congress interfering with our local laws and concerned what the new President would mean for District residents. And while we've celebrated some successes, there's still a lot more work to do. For example, look at the recent proposal to eliminate the DCTAG program that provides critical college funding for DC students  -- all without a say from the people who live here. So mark down DC Vote's annual lobby day on April 16 if you want to tell Congress, "Hands Off DC."

Let's jump right in, and start by talking about the serious challenges facing our public schools.

DCPS is letting our kids down: I joined Joe Weedon, Ward 6's State Board of Education member, to write an op-ed in the Hill Rag about the school attendance and graduation scandal in all but two DCPS high schools. It raises serious doubts and poses real challenges for the graduates who left high school without the skills needed to succeed in college and careers, as well for younger students and families, who are trying to making decisions now for their children's future education. So, where do we go from here and how do we protect the improvements our schools have made even as we work to address serious challenges, including the broader issues of attendance and achievement? That's the conversation Joe and I want to have with Ward 6 residents next. Please take a moment to read our op-ed and let me know what you think.

DC Tuition Assistance Grant (TAG) funding update: You may have seen that in his recent 2019 budget submitted to Congress, the President proposed zeroing out funds for DC TAG, a crucial source of college funding for many DC families. Remember, Congress ultimately sets the budget and DC's Congresswoman Eleanor Holmes Norton called the budget "dead before arrival" thanks to the two-year spending agreement. Still, for seniors trying to make decisions about college, get your applications in and show the importance of this program.

Related: This is a good reminder to check out the DC College Savings 529 plans - start saving now!

Did you receive a letter about lapsed insurance from the DC DMV? I was contacted by a constituent who had received a confusing letter from the DMV notifying her that her auto insurance had lapsed and she was subject to a fine. After double checking with her insurance company, she called my office. I reached out to the DMV Director and alerted her to the letter and she promised to look into it. A few hours later, she called me back to say they had inadvertently sent out thousands of these letters and were taking steps to correct it internally and notify each resident. Please be sure to share this update with your neighbors and friends -- right now, the DMV should fix this without you having to take any action. I will provide any other updates as I hear more.

Public financing for campaigns passes the Council! Last week, I was joined by all of my colleagues in a final vote to pass my bill, the Fair Elections Act, establishing a voluntary public-financing program for candidates running for Mayor, Council, Attorney General, and State Board of Education. This is a big deal for DC, and starting in 2020, it will change the way candidates run for office. WAMU has the report. Thanks to unanimous support from all of my colleagues, the final vote was relatively anti-climatic given how impactful I think this legislation will be on the future of campaigns in DC. I posted video of the actual moment on Facebook.

DC is in the midst of a maternal mortality crisis and we need more data to identify the root causes. The Council held a first vote and passed a bill I wrote to establish a Maternal Mortality Review Committee to study any deaths that are pregnancy-associated occurring before child birth, during child birth, or in the year after. I wrote a longer post on Facebook about why I believe DC needs this as an important first step to understanding and preventing many of these deaths. NBC4 covered the story.

The annual Senior Cupid's Ball was last week in Southwest: I love stopping by this annual event and visiting with some of our seniors. Each year, DPR partners with community groups to bring together our seniors at King Greenleaf Recreation Center in Southwest for music, food, fun, and a little dancing. After chairing an oversight hearing all-day, this was the perfect way to unwind by talking with neighbors. Thanks to everyone who came out and helped create such a great community event.

Full schedule of performance oversight hearings: The four-week window when Council conducts public oversight hearings on nearly every government agency in the city is now underway. Check out the full schedule here (starts on page 3). Remember, you are always welcome as a District resident to come and testify in-person or provide written testimony to the relevant committee.

The Ward 6 Budget Town Hall will be Monday, April 23: Each year, once the Council receives the annual proposed budget from the Mayor, I like to bring together Ward 6 residents to walk through what's in the budget, what I'd like to fund, and hear what your priorities are. And don't worry -- you don't need to be a budget wonk. All you need are some ideas of what you'd like to see prioritized or even just an interest in hearing about the process. Each year, my staff and I use the feedback we hear at this meeting as we work with our Council colleagues to help fund the projects Ward 6ers tell us they care about most. You can RSVP here for the event.

ICYMI - DC Public Library's "Books From Birth" Program Turned 2 Last Month: My very first bill as a Councilmember created the Books From Birth program, which has become a very popular part of DC Library's services. LitHub did a story checking in on the program and framing it in context of Dolly Parton's Imagination Library, the model for Books From Birth. It's a great read on how DC is joining the effort to close the "word gap."

Bus stop and parking along the 300 block of M Street, SW: I've been working with neighbors and pushing DDOT and WMATA to complete the move of a bus stop from the mid-block of the south side of 300 M Street to the corner of 4th and M Streets, SW. The move needs to happen as the 74 bus is being re-routed down 4th Street to P instead of M Street. Unfortunately, DDOT has removed all of the parking while little progress is showing. I have already gotten them to modify the original design in order to minimize the long-term loss of parking spaces on the block. My team and I are now pushing to get the work completed and parking restored as soon as possible. I'll provide more updates as we move along, but I know there's been a frustrating lack of communication and accountability from DDOT and WMATA. Stay tuned as we work to get it sorted out in a way that returns parking and ensures our Metrobus system is best serving our neighborhoods. 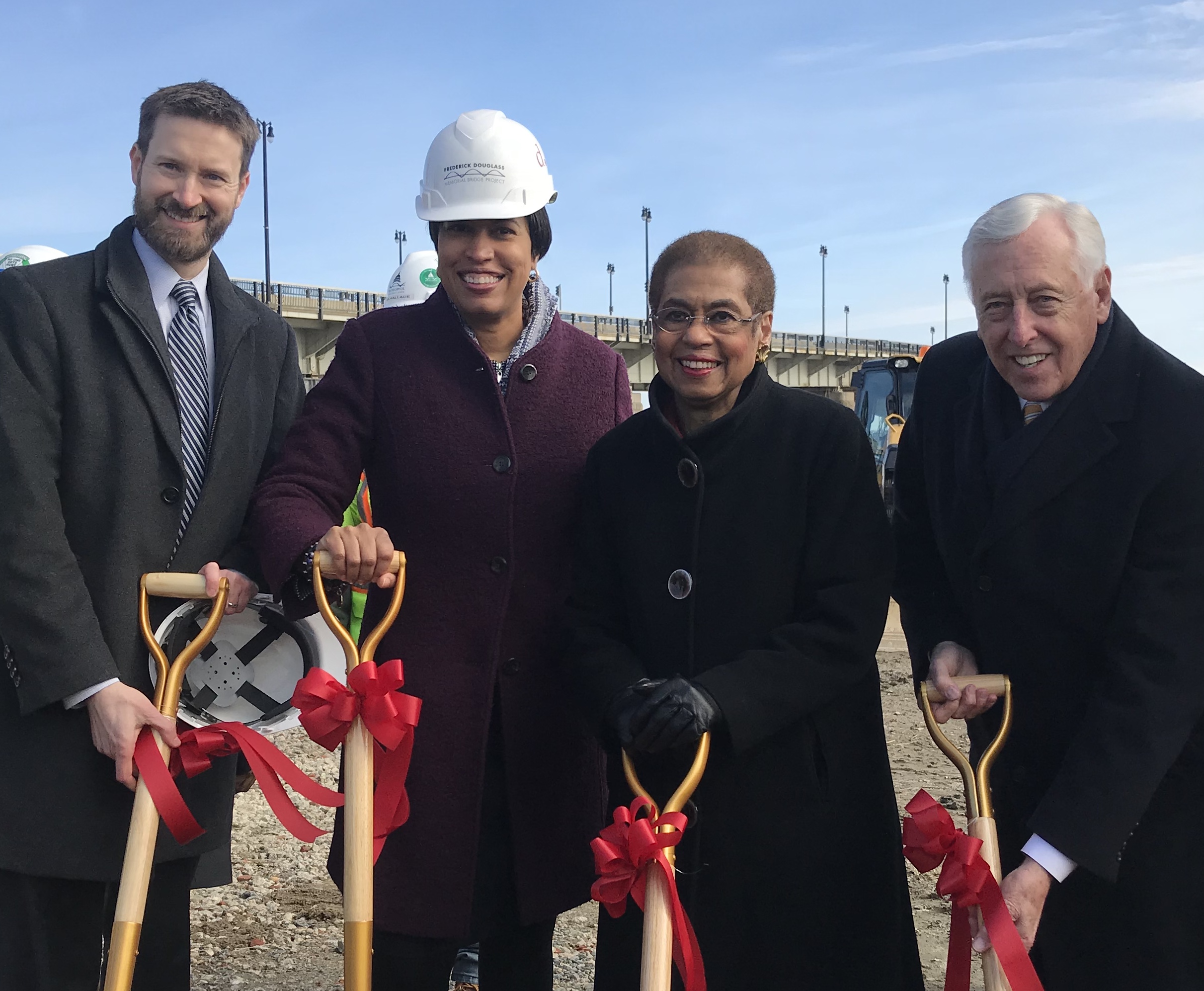 Year of the Anacostia rolls on with Frederick Douglass Bridge Groundbreaking: We broke ground on the new Frederick Douglass Memorial Bridge this week. You may remember that among the reasons to recognize 2018 as the Year of the Anacostia is the 200th birthday of Frederick Douglass, celebrated on February 14. The day before what would have been his 200th birthday, I joined Mayor Bowser, Congresswoman Holmes Norton, US Representative Steny Hoyer, and my colleague on the other end of the bridge, Ward 8 Councilmember Trayon White, to turn the dirt and officially kick-off the project bearing his name, expected to finish in 2021. This will be DDOT's largest project ever and a key part of the health and vitality of our life on and around the river for many years to come. In addition to improved traffic flow, the new design incorporates pedestrian and bicyclist access, space to take in the beautiful view, and improved storm water retention and management.

If you're interested in keeping up with Year of the Anacostia (YOTA), we're aggregating as much info here as possible and putting together a mailing list for events and updates all about YOTA.

An opportunity to shape regional transportation growth and planning: I recently started a term as Chair of the Metropolitan Washington Council of Government's Transportation Planning Board. That's a long name to describe the group of representatives from all of the local jurisdictions that come together and try to tackle our regional transportation issues. It's a great opportunity and I'm honored to have a hand in shaping how we get people (not just cars) to and from their destinations. I wrote an op-ed in the Washington Business Journal outlining five ideas I'd like to pursue during my tenure as Chair of the Planning Board.

Office Hours at Eastern Market next week: I'll be holding my weekly office hours at Radici on Friday, February 23, from 8-9:30 am near Eastern Market. RSVP here - I'd love to chat with you over coffee about any issues on your block or ongoing in the city.

A long update, but that's because there's so much going on across Ward 6! Thanks, as always, and I hope to see you again soon.